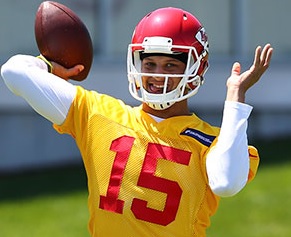 It took a little while, but the Kansas City Chiefs first team offense finally put points on the scoreboard in a 28-14 preseason win at Atlanta Friday night.

Kansas City’s new starting quarterback, Patrick Mahomes, had an up-and-down game. The second-year player was intercepted on a deep throw by Falcons safety Damontae Kazee, who drifted over from the middle of the field to pick a ball intended for Sammy Watkins.

Mahomes caught a break when another ill-advised throw into the end zone was dropped by Falcons cornerback Blidi Wren-Wilson, allowing the Chiefs to salvage a field goal.

But, with just 17 seconds left in the first half, Mahomes made the most of his final pass. Three Atlanta defensive backs inexplicably allowed Tyreek Hill to get behind them, and Mahomes delivered the pass in stride for a 69-yard touchdown.

Previous Post: « Ashcroft says Missouri farmers are optimistic about the future (AUDIO)
Next Post: Cardinals move within half game with win over Brewers »