A woman who lost nine relatives when a Duck Boat sank last month on Table Rock Lake near Branson is spearheading an effort to have the vehicles banned. 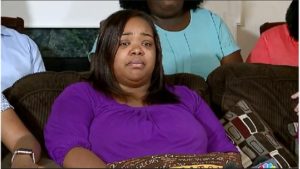 Tia Coleman and her 13-year old nephew were the only two family members to survives the mishap that killed a total of 17 people.

She held a news conference in the living room of her home in Indianapolis Tuesday to announce an effort through change.org to drum up support to ban the amphibious vehicles.

Coleman and her family were in Branson for an annual family vacation when the Duck Boat they were on sank after taking on four-foot swells during hurricane force winds.  Her husband and three children lost their lives in the July 19th tragedy.

Coleman’s petition on change.org also urges support of a bill in Congress sponsored by Missouri’s Democratic Senator Claire McCaskill.  The measure would require the Duck Boat industry to implement safety measures recommended by the National Transportation Safety Board (NTSB) after a similar 1999 Duck Boat accident killed 13 people in Arkansas.

A playpen with toys inside was present when Coleman spoke to the news media at her home Tuesday.  Her three kids who died in the Branson tragedy were one-year-old Arya, seven-year-old Evan, and nine-year-old Reece.  She described the hardship of losing her three kids in the tragedy.

“I want today to kind of tell you a little bit about my family who lived in this house, here,” said Coleman.  “I was in the bed and I woke up cause I heard the bus outside and I almost yelled out, ‘hurry up you’re going to miss the bus.’ And I realized they won’t be getting on any more buses.  My family really meant everything to me, just like everybody else, they meant everything to me.  It’s a house now, it’s not a home anymore.”

Three lawsuits have been filed in the four weeks since the mishap on Table Rock Lake.  Two of them represent the estates of four of Coleman’s relatives who died when the Duck Boat sank.  One of those court cases seeks $100 million in damages.

A third lawsuit was brought by the three daughters of a couple from western Missouri’s Higginsville who were killed in the incident.

A lawsuit on behalf of Tia Coleman is expected eventually.

The two suits representing Coleman family members were filed in federal court.  They allege shortcomings and deliberate oversights led to the mishap.  They say the defendants had been told that design flaws in the Duck Boats made them more susceptible to sinking.

They contend that despite being aware of impending severe weather conditions, Ripley intentionally decided to take the Duck Boat out onto Table Rock Lake instead of canceling the tour and refunding the patrons’ money. The federal suits also state that the defendants had been repeatedly told over two decades to change the design of their Duck Boats to make them safer, but they entirely ignored these warnings.

Ripley Entertainment has not commented on the Branson incident as an investigation by the NTSB is ongoing.  According to the Branson operation’s website, it’s not currently offering Duck Boat rides.

Fitzpatrick, a Republican from southwest Missouri’s Shell Knob contends not enough facts have been issued yet to responsibly write legislation.  “I think that there’s plenty of opportunity to get it wrong,” said Fitzpatrick.