Paul DeJong drilled a walk-off solo shot in the bottom of the ninth to lift the streaking Cardinals to a thrilling 7-6 victory over the Nationals at Busch Stadium.  Washington scored two runs in the top of the frame to tie the game.  St. Louis took the lead in the eighth on homers by Jedd Gyorko and Matt Carpenter.  The Cards have won six straight and are now two games back of the Brewers for the NL’s second wild-card spot.

The red-hot Cardinals play game two of a four-game series with the Nationals tonight at Busch Stadium.  John Gant takes the mound for St. Louis opposite Washington’s Gio Gonzalez.  The Cards are five games back of the Cubs for first in the NL Central.

The Cubs open a two-game set this afternoon against the Brewers at Wrigley Field.  Jose Quintana takes the mound for Chicago.  Milwaukee counters with Jhoulys Chacin.  The Cubs are 68-49 and lead the Brewers by three games for first place in the NL Central. 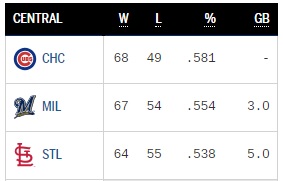