(NASCAR)—Joplin driver Jamie McMurray ran in the top ten briefly at Michigan but faded away to twenty-first at the end of the race.  He’s out of the playoffs unless he snags his first win since 2013 in one of the next three races. And now the question is whether he is out of a ride with Chip Ganassi Racing at the end of the season.

McMurray’s contract runs out at the end of the year and Motorsport.com has reported Kurt Busch will move from Stewart-Haas Racing to take McMurray’s place, bringing his sponsor with him. 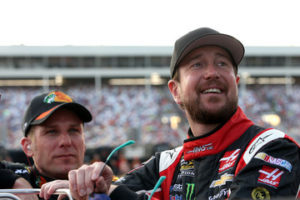 McMurray (left) is in his seventeenth year in NASCAR’s top series, thirteen of those years with Ganassi.  At 42, he’s one of the oldest drivers in the series. He’s 22nd in the points, more than one-hundred points behind the last playoff slot.  If he wins one of the next three races he will make the playoffs for the fourth year in a row. But that’s the only way.

Busch (right) turned 40 earlier this month. He won the Cup title in 2004 and is the highest-ranked non-winner this year.  He says he has talked to several teams about next year but has signed nothing. SHR team co-owner Gene Haas says Busch could be back with SHR next year.  McMurray isn’t commenting. “I just don’t discuss any of that kind of stuff.”

Kevin Harvick won the race at Michigan, leading more than half of the laps to pick up his seventh victory of the year, the most of any drivers.  Kyle Busch, who has six wins, finished third behind Brad Keselowski.  The third member of the “Big Three” this year, Martin Truex, Jr., had problems all day, beginning with an early spin, and continuing with penalties for pitting too soon at the end of the second stage and for a tire rolling out of control during a pit stop. He was able to finish fourteenth despite all those troubles.

NASCAR moves to the short track at Bristol next weekend.

(INDYCAR)—IndyCar picks up its season next weekend on the Pocono tri-oval.  The big buzz of the week in IndyCar, however, has been Tony Stewart’s comment that he’d like to run the Indianapolis 500 again and compete in the 24-Hours of LeMans.

Stewart, a retired NASCAR driver and co-owner of a NASCAR team, has told AUTOWEEK he could run at Indianapolis as early as next year but he doesn’t want his appearance to be “a sideshow” as was (he thinks) Danica Patrick’s final career race there this year. “I want to go feeling like I’ve got the same opportunity to win that everybody else in the field does.” 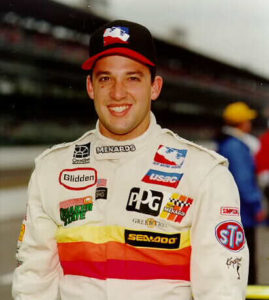 Stewart drove in five 500s with a best finish of fifth in 1997.  He qualified second as a rookie (233.100 mph with a practice lap of 235.719 earlier in the day) in 1996 (right) but started from the pole when teammate Scott Brayton was killed in a practice crash.  Stewart led forty-four laps before his engine let go and he finished twenty-fourth and was voted the rookie of the year. He’s 47 now and he knows IndyCar today is far different from the sport he left to go NASCARing after 2001. He’ll be 48 by next year’s Indianapolis 500.

He says he’s not going to insult the series regulars by showing up at Indianapolis expecting to be one of their equals.  “It’s foolish to think you can just show up and be competitive and have a shot to win,” he said to the magazine’s Matt Weaver. “I would definitely want to run at least one race (before Indianapolis). One race may not even be enough to be where you need to be.  If I do it, I’m doing it because I want to win the race.”

Stewart has won twice at Indianapolis, both times in the Brickyard 400 NASCAR race. Although he’s out of stock car racing, he likes to spend his spare time in a sprint car.

(FORMULA 1)—The summer break in Formula 1 continues for two more weeks.  Lewis Hamilton leads Sebastien Vettel by 24 points heading to the Grand Prix of Hungary on the twenty-sixth.