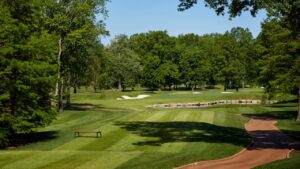 After shooting 64 in the opening round, Gary Woodland carded 66 to sit 10-under after two rounds to hold the clubhouse lead at the PGA Championship.

His 130 is the lowest 36-hole total in PGA Championship history.

Kevin Kisner sits at 9-under and had a chance at the PGA Championship scoring record until a bogey on his last hole pushed him to 64.

Brooks Koepka is at 8-under after he tied a PGA Championship record with 63 while Charl Schwartzel also shot 63, leaving him at 7-under. There hadn’t been two 63s on the same day at a major since the 1980 U.S. Open, when Jack Nicklaus and Tom Weiskopf did it.

Play was suspended the rest of the day because of approaching storms shortly after Tiger Woods hit his second shot on the par-5 eighth hole. Woods was 3-under through seven holes and 3-under for the tournament.

Previous Post: « Cardinals blank Royals to open I-70 series
Next Post: McMurray on the playoffs’ outside, but is he also out? »