A northeast Missouri businesswoman has captured the GOP nomination for a key state Senate seat being vacated in January by term-limited State Sen. Brian Munzlinger, R-Williamstown. 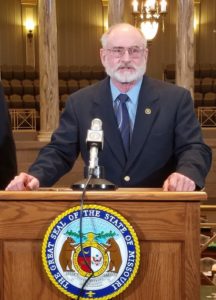 The sprawling district covers 14 counties in northeast and north-central Missouri, stretching from Clark County on the Iowa border to Chariton County, west of Moberly.

O’Laughlin carried only four of the counties, but two of them were large counties: Randolph and Macon. Moberly and Macon are the two biggest towns in those counties.

Republicans have held the seat since 2010, when Munzlinger unseated Shoemyer.

Redmon and Shumake are in their eighth and final years in the Missouri House, due to term limits.

Munzlinger is the powerful chairman of the Senate Agriculture Committee.