(NASCAR)—Chase Elliott finally has finally gotten to victory lane, having just enough fuel to make it to the finish line and holding off defending race and series champion Martin Truex Jr., in the closing laps on the Watkins Glen road course. Truex threatened until he ran out of gas on the last lap and coasted home in second place.
Elliott had eight runner-up finishes before getting his first Cup win after 99 races. He’s 22, one of the sport’s “young guns” that are starting to push their way into the top tier of drivers. He’s the second next-gen driver to win in the last four races. Erik Jones, also 22, won at Kentucky. He was fifth at the Glen.
Elliott’s father, Bill, also finished second eight times before getting his first win. As with his son, Bill’s first victory was on a road course, the old Riverside Speedway in California.
Six of the top ten drivers at Watkins Glen are 26 or younger. Other than Elliott and Jones, others in the top ten were Daniel Suarez, 26, who was fourth; Kyle Larson, 26, in sixth, and William Byron, who is only 20, was eighth.
Truex is 38. Kyle Busch, who was third, is only 33. Brother Kurt, who is 40, was ninth. Joplin’s Jamie McMurray and Kevin Harvick two of the old guys in NASCAR at 42, were seventh and tenth. 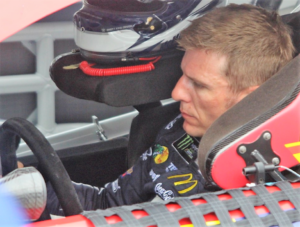 The finish is only the fourth top-ten for McMurray this year. He had eleven of those last year, his third straight year in the playoffs. He’s winless since 2013 and needs a victory to make the playoffs in 2018. He’s 51 points outside the number needed to make the first round of sixteen drivers who will race for the title and has only four races to get in that field.
Clint Bowyer just missed his eleventh top-ten with his second-straight 11th place finish at the Glen. He’s already locked into the playoffs with two victories.
NASCAR returns to Michigan next weekend.
(INDYCAR)—IndyCar looks forward to its next 500-mile race, in two weeks at Pocono. Alexander Rossi, gaining are reputation as a driver who knows how to light-foot the accelerator late in the race, won at Mid-Ohio last weekend, thirteen seconds ahead of rookie Robert Wickens.
Rossi’s win moves him into second place in the points standings, 46 points behind Scott Dixon and fourteen points ahead of defending series champion Josef Newgarden. Dixon was fifth at Mid-Ohio.
(FORMULA 1)—Seven-time F1 race winner Daniel Ricciardo has surprised the sport by announcing he’s leaving Red Bull Racing for Renault in 2019. Ricciardo has been with Red Bull in various racing series for a decade and has been in Formula 1 since 2011. He’s a two-time winner this year and is fifth in overall points.
Lewis Hamilton has moved back ahead of Sebastien Vettel in the standings with wins in his last two races, giving him five for the year. Vettel has won four times.
F1 is on its summer break and will next run August 26 with the Belgian Grand Prix. Hamilton won last year on the Spa-Francorchamps circuit, at 7.004 km one of the longest courses in the series. He’ll be trying to become only the fifth driver to win four or more Belgian Grand Prix races. The Belgian Grand Prix is one of the oldest races in what is now Formula 1. Antonio Ascari won the first race in 1925, a few days before he was killed in the French Grand Prix. His son, Antonio, won the race twice in the early 1950s. The current circuit layout has been used, however, only since 1983.
(photo credit: Jim Coleman)