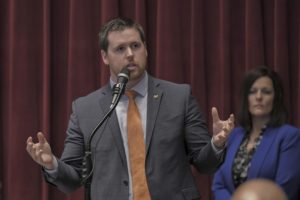 “I think that there’s plenty of opportunity to get it wrong,” he says.

Seventeen people died in a duck boat last month when it filled with water and went under during a thunderstorm on Table Rock Lake in Branson. Officials have said a full investigation could take at least one year.

“I was there for the recovery of the boat and I don’t even personally feel comfortable with saying right now exactly what we need to do to make sure it doesn’t happen again,” Fitzpatrick says. “I think until we have significantly more information than we have right now, yeah I don’t think there should be any legislation passed until we know quite a bit more than what we know right not. Will that take a year? I don’t know. If it does, then maybe it does.”

U.S. Senator Claire McCaskill, D-Missouri, says she’s drafting legislation that would require amphibious boats to be equipped to stay afloat during flooding and interim measures including the removal of canopies and increased inspections until the ducks are upgraded.

“We’ve had more than 40 deaths associated with duck boats since 1999, yet there has been little done to address the inherent dangers of these amphibious vehicles,” McCaskill says during floor debate. “The NTSB recommendations following the 1999 incident in Arkansas were pretty straightforward, but unfortunately nothing happened. So I’m in the early stages of drafting legislation, with input from NTSB and the Coast Guard, to require that the design issues with amphibious passenger vessels be addressed—and that boats that are not compliant be taken out of service until they can be compliant.”

Congressman Bill Long, R-Missouri, has said Congress must do whatever is needed to prevent future duck boat tragedies.