You are here: Home / Sports / Cardinals trade Pham to Tampa 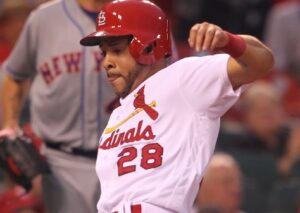 The 30-year-old Pham has been a member of the Cardinals organization since being drafted in 2006. He was batting .248 this season with 14 home runs and 41 RBIs as St. Louis opened the day
seven games out of the NL Central lead during a season in which the team has already fired manager Mike Matheny.