(IndyCar)—Jay Frye is a big guy who wouldn’t fit well in the cockpit of an IndyCar racer.  He looks more like the Missouri Tiger lineman that he was a few decades ago when he played at Faurot Field.  This time of year he’s overseeing IndyCar competition as the season heads into its last couple of months, just as the Tigers start cranking up for practices and their first games in a few weeks.

Frye is in his third year as President of Competition and Operations for the IndyCar series. He’s overseen development of the aero package that has given the cars a new look this year and is watching development of the protective windscreen that has undergone on-track tests to general approval of the drivers. 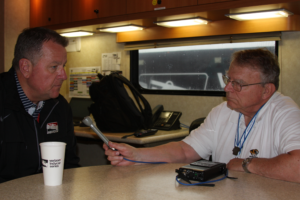 We talked with him a few weeks ago in his infield office at the Indianapolis Motor Speedway about the windscreen, the aero package, women drivers who will follow the now-retired Danica Patrick into the top levels of open-wheel racing, the upcoming race a Gateway International near St. Louis, and a few other things, including a little bit about the Tigers and a scheduling conflict that will force him to miss a game he’d really like to see.

Something new is being built at the Indianapolis Motor Speedway that recalls the roots of American racing while making history at the old track.

Inside the third turn is a dirt track.   A quarter mile.  And on Wednesday and Thursday evening before the  September 9 Brickyard 400, midget races will be held there.  It will be the first time that racers have run on dirt at the Speedway.  Not even the first races, in the fall of 1909 before millions of bricks were put down, were run on dirt (the surface of crushed gravel mixed with taroid was so dangerous that bricks were laid down before the first Indianapolis 500 in 1911).

We haven’t heard if the track is a one-off or if it will still be there in May.