You are here: Home / Sports / Royals send Moustakas to Milwaukee for prospects 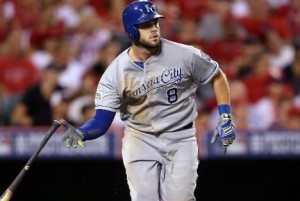 The Kansas City Royals are trading one of the faces of their franchise. Third baseman Mike Moustakas was dealt to the Milwaukee Brewers on Friday for minor leaguers Brett Phillips and Jorge Lopez.

“Moose” was drafted by Kansas City in 2007 and has earned two All-Star appearances with them.

Phillips, a 24-year old lefthanded hitter out of Seminole, FL, is hitting .240 (62-for-258) in 71 games with 12 doubles, seven triples and six home runs for Colorado Springs (AAA).  He’s also spent 15 games with the Brewers over three different stints this year, going 4-for-22 (.182) with a triple.  He has 52 career big league games with Milwaukee dating back to last season, hitting .257 (28-for-109) with three doubles, a triple and four home runs.  Phillips was a sixth round pick of the Houston Astros in 2012 out of Seminole High School.  He was ranked as the Astros’ No. 2 prospect when he was traded by Houston along with right-handed pitcher Adrian Houser, outfielder Domingo Santana and left-handed pitcher Josh Hader to the Milwaukee Brewers for outfielder Carlos Gomez, right-handed pitcher Mike Fiers and other considerations on July 30, 2015.

Lopez, 25, has spent the majority of this season with Colorado Springs as well, going 3-3 with a 5.65 ERA in 24 relief appearances, earning five saves in seven opportunities. He’s also appeared in 10 games for the Brewers, going 0-1 with a 2.75 ERA, allowing six earned runs in 19.2 innings while fanning 15. During an eight-year minor league career, Lopez has gone 44-49 with a 4.42 ERA in 178 games (118 starts), while posting a 1-2 ledger and 3.69 mark in 13 games (two starts) for the big league club over three seasons.  He was selected by the Milwaukee Brewers in the second round of the 2011 First-Year Player Draft out of the Caguas Military Academy in Puerto Rico.