Voters who cast ballots in the August 7th Missouri primary will have an opportunity to weigh in on a long-running contentious issue in the state. 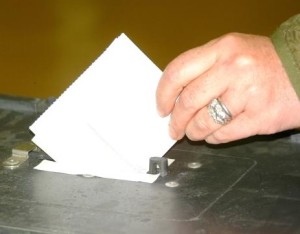 A referendum known as Proposition A will determine if Missouri becomes a right to work state.  If voters pass the proposal, unions will be prohibited from collecting fees from non-union employees.

Currently, labor organizations sign individual contracts with workers at different businesses that can have varying arrangements.  Some workplaces require union membership as a condition of employment while others might only require non-union workers to pay “fair share fees”.

According to the United States Bureau of Labor Statistics, union membership has been on an up and down, but overall steady decline over the past decade in Missouri.  As of 2017, 8.7% of wage and salary workers in the state were union members which amounts to 226,000 employees.

In addition, there were another 39,000 nonunion members who were covered by union contract negotiations for pay and benefits.

Supporters of the right to work ballot measure say it would give employees the freedom to choose whether to support labor union.  Those who oppose it claim it would hurt unions by allowing freeloaders to enjoy union benefits without paying dues.

A U.S. Supreme Court decision in late June effectively made Missouri a right to work state for public sector employees.  The high bench ruled that government workers who choose not to join a union cannot be charged for the cost of collective bargaining.

Right to work is a political issue

The right to work issue has been mostly, but not entirely, divided along party lines with Republicans joining with business interests to favor of it while Democrats tend to side with labor groups against it.  A few Republicans in the state legislature that have a strong union presence in their districts will vote in favor of labor priorities.

The road to the upcoming referendum has been years in the making.  Republicans have been trying to make Missouri a right to work state for over a decade.  But legislation the GOP majority passed was repeatedly vetoed by two-term Democratic Governor Jay Nixon.

The stars seemed to be aligned in 2017 when Republican Governor Eric Greitens took office.  The majority party fast-tracked a right to work bill through the general assembly and Greitens raced to sign it roughly a month after legislative session started.

But as Republican Senator Bob Dixon of Springfield later noted on the chamber floor, lawmakers had errored in their speedy work by giving labor groups too much time to respond.  Unions and their allies organized a massive effort to gather signatures to force a public vote on the law, meeting every deadline and surpassing numerous participation records along the way.

During the process, right to work proponents brought a lawsuit challenging the wording of the impending ballot measure.  The court suit ultimately failed, and the secretary of state set a public vote for November.

Then in the final days of this year’s legislative session, the Republican majority approved a resolution to move the ballot measure’s voting date from the November general election to the August 7th primary.  Governor Greitens signed off on the plan six days before he resigned from office on June 1st.

GOP Senator Dave Schatz, who sponsored the resolution said the earlier voting date was necessary to give closure to parties impacted by the right to work law.  University of Missouri Political Science Professor Peverill Squire questions the sincerity of Schatz’s reasoning.

“I think that’s a little disingenuous,” said Squire.  “I’m not sure any company is really chomping at the bit to make a decision about whether to locate in Missouri based on whether we have the right to work measures or not.  And certainly, between August and November is probably not going to make a lot of difference to most of those companies.”

Columbia College Political Scientist Terry Smith thinks the move to August robs Democrats of their most favorable lineup with right to work and party stalwart Senator Claire McCaskill on the same ballot.

“Democrats are going to be highly motivated to defeat this,” said Smith.  “And if it were on the November ballot, they would make sure that they got their people there to vote against right to work.  And also, ‘While your there, vote for Democrats.”

Squire believes Republicans moved the voting date in what he thinks will be a failed effort to suppress Democratic turnout for Senator McCaskill’s November contest.

“They’re calculating maybe some of those people won’t show up again in November and support Senator McCaskill,” Squire said.  “I think that’s probably their motivation.  There’s probably not a lot of evidence to suggest that it will make a huge difference.”

If the right to work law passes in August, the power of unions in Missouri could be permanently diminished.  If the ballot measure fails, right to work supporters will likely return with another legislative proposal quickly.  Only a constitutional ban on right to work would prevent it from being reintroduced.

Previous Post: « Cubs will come to St. Louis missing one of their big stars
Next Post: U.S. Senators request drought help for Missouri farmers and ranchers »