Odessa’s mayor supports the ten-cent gasoline tax increase that will appear on your November statewide ballot, noting that his growing western Missouri community needs a new I-70 interchange. 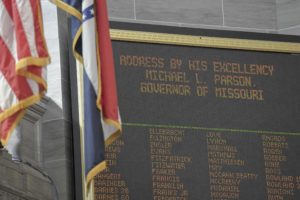 This is the Missouri House voting board, as Governor Mike Parson addressed a joint session of the Legislature on June 11, 2018 (file photo courtesy of Tim Bommel at House Communications)

Odessa’s population is now about 5,300, and its median household income has jumped to $48,932, according to the Odessa Chamber of Commerce website.

Odessa Mayor Couch says transportation is one of the biggest issues facing his town.

If Missourians approve the gasoline tax increase, it would be phased in over four years at 2.5 cents annually.

Governor Parson says he’ll continue to reach out to rural and urban mayors across the state to hear their concerns.

Parson met last week at the Statehouse in Jefferson City with five mayors from the Kansas City region, including Couch.

“But really we want those second layer of mayors that we want to be able to reach out to in those smaller communities to make sure their voices are being heard and see how the things are that we might be able to help them to do their jobs,” says Parson.

All of those cities are located on or near I-70.

Governor Parson says infrastructure and workforce development are two of the biggest priorities for mayors.

Click here to listen to the full interview between Missourinet’s Brian Hauswirth and Missouri Governor Mike Parson, which was recorded at the Governor’s office in Jefferson City on July 17, 2018: