A law beginning in August is meant to let Missouri counties collect a fee from cell phone users for local 911 services. If approved by a state 911 oversight board and local voters, individual counties could collect a monthly fee of up to one dollar. They would have to present a plan to the board to show how the money would be spent. State Rep. Jeanie Lauer, R-Blue Springs, is the bill sponsor. She tells Missourinet landline users, mostly the elderly and businesses, are absorbing the fees for Missouri’s 911 services. 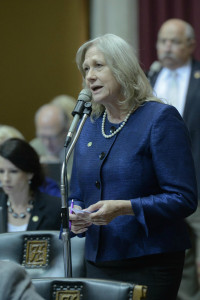 “We’re actually creating a greater level playing field for these fees to be charged to make it fairer across the board,” she says.

Under the policy, Lauer says landline and mobile phone users would pay the same county fee each month.

According to Lauer, about 80% of emergency calls come from cell phones.

“We need to really bump this up for our citizenry, for our tourists, but also for our first responders. We have evidence that there are times when they are put in harm’s way because of insufficient 911 services,” she says. “Sometimes it is a matter of if it doesn’t happen to you, we really don’t think about it. For those people who have experienced this, this is a major issue.”

Lauer points to the area around the Current and Jacks Fork Rivers in southeast Missouri that do not have 911 service. During the summer, about 1.8 million people visit the region.

“These are populated areas that we might think of them as really rural and there’s hardly anybody there but that’s not the case,” she says.

Lauer says about 15 Missouri counties do not have a 911 system.

“The state, as a whole, does not have the level of 911 service that is as adequate as across the country. We are the last state in the union to have the funding associated with 911 as other states do,” she says. “There have been people who have not survived in the state because of not having adequate 911 service. It may be that there is a level of service, but it takes them too long to get there. The response time is so critical. That is just heartbreaking to me that we are sacrificing people’s lives for not having this level of service.”

She says the fee could be up to one dollar and cover things like emergency texting, upgrading phone systems, staffing, training and pinpointing where calls are coming from.

“Of course, that is critical if you are in let’s say a domestic violence situation, a hostage situation. Let’s say you can’t talk; you can’t breathe. We’ve had testimony from the Director of the Deaf and Hard of Hearing Commission. Without the ability for them to text 911, they have to text someone to call 911 for them,” Lauer says.

The ability to locate where calls are coming from is also a major roadblock for first responders and response times.

“Some of the areas are not even mapped. It’s like they’re on a dirt road with a fork in the road. You can’t really locate that,” Lauer says. “We still are not at a point where exactly a person is at. Let’s say you’re in an apartment building in one of the cities. They (first responders) can ping the address. They will know what the cross streets are, but they will not know where you are at in the building.”

Additionally, Lauer says some sheriff’s office clerks might be answering 911 calls who are not properly trained to instruct callers on how to give CPR, for instance.

Lauer says the need for having 911 services and enhancing the system has struck.

“Now we’re seeing really the negative results of what is happening by not having it. I think the sense of urgency, the sense of reality of what is going on is hitting,” she says.

Lauer, who is serving her final year in the state House, has sponsored the bill for six years.

Governor Mike Parson, R, who signed the bill into law this month, praised Lauer for her multi-year effort.