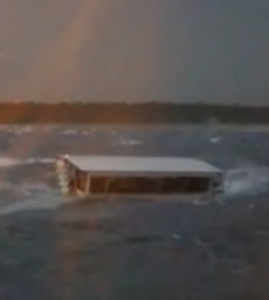 Hawley says there are multiple investigations into the tragedy, involving several agencies.

He says there’s an investigation into the sinking of the vessel itself, and says the National Transportation Safety Board (NTSB) and the U.S. Coast Guard are handling that.

Hawley also says there is another investigation into the circumstances that led to Thursday evening’s tragedy, and says the Missouri State Highway Patrol is overseeing that.

He tells reporters he had good meetings Saturday with Missouri state troopers and with the Coast Guard, adding that he’s encouraged by the progress that’s been made so far.

Hawley emphasizes the investigations are in their early stages.

The Attorney General tells reporters he is “strongly encouraging” the owners of “Ride the Ducks” to cooperate with the Highway Patrol’s investigation.

He says their full cooperation “is something that will be very necessary going forward.”

Hawley is also encouraging anyone with videos of Thursday’s Table Rock Lake incident to share that video with the Missouri State Highway Patrol.

Missouri’s two U.S. Senators arrived in Branson on Friday, and were briefed by the National Transportation Safety Board (NTSB), the Coast Guard and the Missouri Highway Patrol.

U.S. Sen. Claire McCaskill (D) is pledging to examine legislative solutions to increase safety on amphibious vehicles, and praises the cooperation of the two federal agencies investigating the incident.

U.S. Sen. Roy Blunt (R) describes the deadly incident as a “tragedy that never should have happened.” He says he’s ready to “pursue whatever action is necessary” to prevent a future tragedy.

Previous Post: « Interview with duck boat survivor: “When that boat is found, all those life jackets are going to be in there”
Next Post: Missouri congressman discusses Table Rock Lake tragedy and possible congressional action (AUDIO) »