A state representative from southwest Missouri’s Carthage is the new vice chairman of the House Budget Committee. 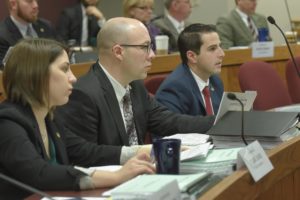 State Rep. Cody Smith, R-Carthage, who’s finishing his first House term, says the Budget Committee is the most important committee in the House.

“It’s the one thing that we have to do, if we don’t move any other pieces of legislation, if the governor doesn’t sign any other bills, we absolutely have to pass a budget each year,” Smith says.

The Missouri Constitution requires lawmakers to approve a balanced budget by May, each year.

He tells Missourinet his short-term goal is to continue to immerse himself in the budget process, noting he’s spent lots of time in budget hearings and speaking to department personnel.

“My long-term goals would be to continue to try to find efficiencies within these programs, within these departments, and try to help impose fiscal discipline,” says Smith.

Smith is focused on working to ensure that Missouri funds priorities.

“We need to come up with a lot of money to maintain and fund our highways and bridges,” Smith says. “Education is always a big-ticket item, and also our Medicaid program is a large program. It takes up almost, well a little over a third of our budget in the state.”

Smith also praises the committee’s ranking Democrat, State Rep. Kip Kendrick, D-Columbia. He says he and Kendrick communicate well and respect each other, even when they disagree on policy.

Smith says he couldn’t be happier with the makeup of the Budget Committee.

The Carthage lawmaker, who’s a realtor with a banking background, is seeking a second House term this fall. He faces Carl Junction Democrat Chad Fletcher in November.

Click here to listen to the full interview between Missourinet’s Brian Hauswirth and State Rep. Cody Smith, R-Carthage, which was recorded on July 12, 2018: