The Missouri Department of Public Safety has permanently revoked the license of former trooper Anthony Piercy. He was involved in the 2014 drowning of 20-year-old Brandon Ellingson of Iowa on the Lake of the Ozarks. 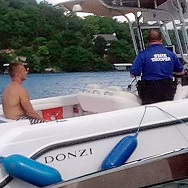 Brandon Ellingson sits in the back of a State Highway Patrol boat on the Lake of the Ozarks after being arrested in May.

In 2014, Piercy arrested Ellingson on suspicion of boating while intoxicated. Ellingson fell out of a water patrol boat while handcuffed and wearing a life jacket that was not properly secured.

Last month, Cole County Circuit Court judge Patricia Joyce said the highway patrol’s firing of Piercy was unlawful. Joyce said State Patrol Superintendent Sandra Karsten did not have the authority to fire Piercy last December without the recommendation of the patrol’s disciplinary board. That board recommended moving Piercy elsewhere in the state.

Joyce sent the case back to the agency for consideration of a lesser penalty.

Piercy’s lawyer tells the Kansas City Star he plans to appeal today’s decision by the Missouri Department of Public Safety.