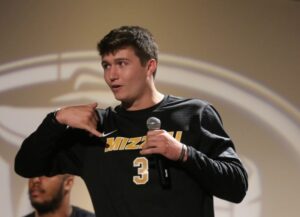 Will NFL teams still come calling for Drew Lock even if the advisory committee told him to return for his senior season? (photo/Mizzou Athletics)

Beckner started all 13 games while posting career-high marks in tackles (38), tackles for loss (11.0), sacks (7.0) and QB hurries (five). He was the team’s Interior Lineman of the Year award winner a year ago. He is a fourth team Preseason All-American and All-SEC First Team pick in the Preseason by Athlon Sports as well.

Lock led the SEC in 10 offensive categories a year ago, including passing TDs (44), yards per attempts (10.0), yards per game (304.9), total offense (313.5) and passing efficiency (169.4). He is the SEC and Mizzou single-season record holder for passing TDs with 44 in 2017. He also set Mizzou’s single-season passing efficiency mark a year ago at 165.67. He was the All-SEC First Team selection at quarterback by both the AP and league’s coaches.

Mizzou Football will open the 2018 season on Sept. 1, 2018, against UT Martin at Memorial Stadium.