(NASCAR)—Joplin driver Jamie McMurray’s hopes of making the NASCAR playoffs for the fourth straight year appear likely to depend on whether he can win one of the seven races remaining before the sixteen-driver competition list is assembled. 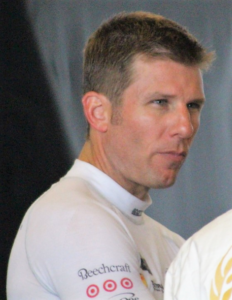 McMurray hasn’t won since 2013 and is averaging a 20th place finish this year. His 17th place finish at Kentucky this weekend has left him 21st in points, 82 points away from 16th in the standings.

Martin Truex, Jr., picked up his fourth win of the year, starting first, finishing first, and sweeping all of the race’s stages.  He led 174 of the 267 laps and was almost two seconds ahead of Ryan Blaney at the end.

Our other Missouri driver, Clint Bowyer, was 12th but holds fifth in the overall points standing.

(INDYCAR)—Scott Dixon has taken advantage of a leader’s mistake to win the IndyCar race at Toronto.

It’s Dixon’s third win of the year, his career 44th in the IndyCar series. Only A. J. Foyt and Mario Andretti have more victories. He moved to the point after pole-sitter and leader Josef Newgarden brushed the wall on a 33rd lap retart.  Newgarden had led the first thirty-two circuits.  The victory moves Dixon 33 points ahead of Newgarden with five races to go, including the IndyCar return to Gateway International Raceway, near St. Louis, on August 25.

Simon Pagenaud finished second and Canadian rookie Robert Wickens got the final podium position.  It was Wickens’ first race on home ground in more than a decade. Another Canadian, James Hinchcliffe, was fourth.  No Canadian has won the Toronto IndyCar race since Paul Tracy won the second of his two victories there in 2003.

(FORMULA 1)—Formula 1 took the weekend off before running at Germany and Hungary on the next two weekends then going on its summer break.  F1 cars won’t be back on the road after Hungary until August 26.

Previous Post: « DeWitt on managerial change-“Some places, just having a winning record, or being .500 is acceptable…not in this city”
Next Post: Company’s scheme at Missouri hospital prompts legal action, calls for federal probe »