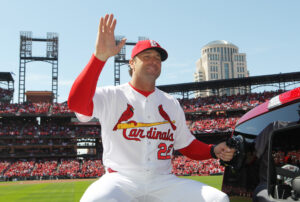 The St. Louis Cardinals fired manager Mike Matheny along with hitting coach John Mabry and assistant hitting coach Bill Mueller.  The moves were made shortly after the Cardinals 8-2 loss to the Reds on Saturday evening.

“Mike Matheny has served the St. Louis Cardinals organization with tremendous dedication and pride and I am thankful for his service to the Cardinals over the past six and a half seasons,” stated Cardinals’ Chairman & Chief Executive Officer Bill DeWitt, Jr. “On behalf of the entire Cardinals organization, I would like to wish Mike the very best.”

“These decisions are never easy, but we felt that a change in leadership was necessary as the team prepares to enter into the second half of the season,” said President of Baseball Operations John Mozeliak. “I would like to thank Mike for his exceptional commitment and devotion to the Cardinals organization, including many fond memories of our years working together.”