You are here: Home / News / Missouri is middle of the pack for speeding and reckless driving laws

On a heavy travel weekend after the Fourth of July, Missouri will likely have its share of high speed and reckless drivers avoid legal roadblocks. 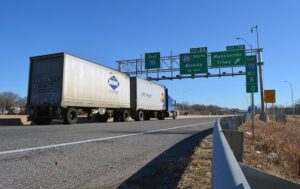 I70 corridor in Missouri, photo courtesy of MODOT

A new report from personal finance website Wallethub places Missouri in the middle of the pack for states that crack down on speeding and reckless driving.

The state ranks 29th overall, a result of a higher score for speeding penalties and a low placement for reckless driving.  The ranking is no surprise to AAA Missouri’s Mike Right.  “Missouri is kind of in the middle of everything,” said Right.  “It’s not the most stringent, in most cases, of anything.  It’s pretty middle of the road in terms of its attitude toward driving laws.”

The language in Missouri law actually identifies out of control behavior behind the wheel as “careless and imprudent” rather than “reckless”.  Missouri’s careless and imprudent driving law requires motorists to drive in a “careful and prudent manner”, drive at a rate of speed so as not to endanger the person or property of another, and “exercise the highest degree of care.”

Wallethub awards points in the reckless driving category based on the length of license suspensions and jail time served along with the size of fines for committing the offense.  Missouri is tied for 41st with four other states for strictness of its reckless driving laws.

It ranks much higher, 19th, for the stiffness of its speeding violations.  Those points are awarded based on the threshold when speeding becomes a reckless driving offense, the average increase in insurance cost after a speeding ticket and how strictly speeding laws are enforced in court.

AAA Missouri’s Mike Right points out that tougher penalties for driving infractions don’t always translate to fewer accidents.  “You could go and you could find evidence, sort of, that by virtue of the fact that you have strong laws in this particular area, you consequently have fewer crashes,” Right said.   “Not necessarily so.”

Driving 20 mph or greater over the speed limit is a Class B misdemeanor, which can carry a penalty up to up to six months in jail fine up to $500.

A violation of the basic speed rule that results in an accident is a Class A misdemeanor that carries a punishment of not more than 1 year and/or not more than $1,000.

There are speed limits in Missouri that apply to categories of roads.

On limited access rural interstates and freeways, the maximum speed is 70 mph.  Those highways are “limited access”, meaning they do not have access to or from roads or other highways at the same grade level.  The speed limit on urban interstate highways and freeways (areas of fifty thousand population at a density at or greater than one thousand persons per square mile) is reduced to 60 mph.

Expressways in Missouri are defined as divided highways of at least ten miles that have crossovers or accesses from roads or other highways at the same grade level.  The speed limit on rural expressways is 65 mph while it is 60 mph on urban expressways.

Local governments with state approval may establish speed limits on the streets or roads within their jurisdiction.