It doesn’t make the brightest burst or the loudest boom. But Missouri Fire Marshall Tim Bean says sparklers send more people to the hospital than other fireworks. 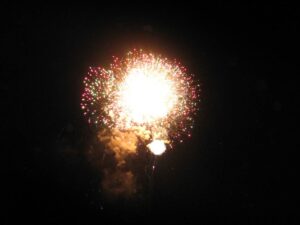 “That is one of the leading causes for burns in children,” Bean says.

Bean recommends checking out professional fireworks shows to stay safe. Personal fireworks, including sparklers, are not allowed in many local towns, including the larger cities of St. Louis and Kansas City as well as Springfield, Columbia and Jefferson City.

Chief Jason Turner of mid-Missouri’s Jefferson City Fire Department says those paper balloon sky lanterns are not allowed in most places either.

Bean says if you do go where it’s legal, make sure you find a relatively wet spot without much vegetation.  “Have a water hose, a bucket of water, something that you could extinguish a fire (with) if it was to break out,” Bean said.  “A good location is what we would recommend.”

Bean was appointed to his position as state Fire Marshall by former Governor Eric Greitens in early February 2017, shortly after Greitens took office.  Bean was previously the fire chief in southern Missouri’s West Plains where he served in the fire department for 30 years.

He was appointed to be fire chief in West Plains in 2001.  Under Bean’s watch, the city’s fire department doubled its full-time staff to 16 firefighters.  It also now has three fire stations that are manned 24-hours-a-day.