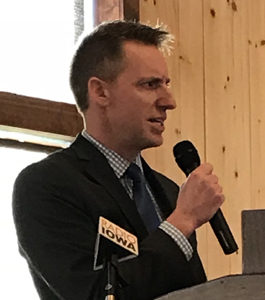 He was featured in a segment along with Democratic Maryland governor candidate Ben Jealous, a former President and Chief Executive Officer of the NAACP.

Kander was asked if the Immigration and Customs Enforcement (ICE) agency should be disbanded, an action that has picked up steam among Democrats since the Trump administration implemented a policy of separating children from parents entering the country as undocumented immigrants.

Kander said ICE has failed to accomplish its intended goals after falling under the influence of President Trump.

“I agree with the people who have said that this cannot be President Trump‘s personal law enforcement, personal army,” said Kander.  “That’s not what this is supposed to be.  And what it actually ends up creating is a situation where it is not able to accomplish any of the goals that it was put forth for in the very first place.”

President Trump has since backed away from his policy

Kander,a former Democratic U.S. Senate candidate, is one of nine people to have entered the non-partisan Kansas City mayor’s race which includes several business owners, an attorney, four city council members, and the Kansas City Mayor Pro Tem. The winner will succeed term-limited Mayor Sly James in a contest that is almost a year away.

Kacie DC host Kasie Hunt asked Kander how national Democrats could help or hurt his chances in the mayor’s race.  He answered by noting the non-partisan nature of the Kansas City race and said it’s important for anyone seeking office to be authentic.

Kander refused to respond when asked if President Trump should be impeached, but instead said he’d be supporting Democrats and labor interests in this year’s elections.

“We got Claire McCaskill running here in Missouri,” Kander said.  “It’s incredibly important to Kansas City that she’s reelected because she does right by our town.  That’s where my focus is going to be.  We’ve got an opportunity to defeat right to work on the ballot here in August.”

Unions were successful in getting a right to work law passed by the legislature in 2017 before a public vote.

Kander, who is now 37-years-old, enjoyed a quick rise in politics after attending college in the nation’s capital and joining the military.

While a law student, Kander joined the ROTC and became a lieutenant in the United States Army Reserve. He served in Afghanistan as a military intelligence officer from 2006 to 2007.  Kander took a position as an instructor at the U.S. Army’s Fort Leonard Wood installation in Missouri upon completing his deployment.

He won election to the Missouri House of Representatives in 2008 where he served two terms representing the 44th District.

Kander was elected secretary of state on 2012, defeating Republican Shane Schoeller.  He succeeded Robin Carnahan, a fellow Democrat who made an unsuccessful run for U.S. Senate in 2012.

After serving one four-year term as secretary of state, Kander narrowly lost the 2016 U.S. Senate race by 3 points to Republican incumbent Roy Blunt.  Donald Trump carried the state by 19 in the Presidential race during the same election that also saw Republican Eric Geritens defeat Democrat Chris Koster by 6 points for governor.

In 2017 Kander formed the political action committee Let America Vote with the goal of ending voter suppression across the country.

The organization’s focus is in sharp contrast to current Republican Secretary of State Jay Ashcroft who has prioritized establishing strict voter ID laws to combat voter fraud.  Most Democrats contend voter fraud is practically nonexistent and believe Republicans use it as a means to suppress the votes of young people and minorities who tend to cast ballots for Democrats.

Kander’s run for mayor has been seen as a surprise for someone often mentioned by political observers as a possible Democratic candidate for president.

Jolie Justus, a councilwoman who was among the contenders for mayor, announced she would instead run for re-election to her council seat, and said she would support Kander’s campaign.