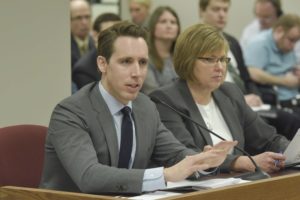 Hawley says Bridgeton Landfill LLC will establish a $12.5 million fund that will provide restitution to residents in and near Bridgeton.

Bridgeton Landfill LLC will also pay $3.5 million in penalties and damages to the state.

The settlement comes after five years of litigation.

Hawley notes the state filed a lawsuit in 2013, alleging violations of Missouri’s environmental regulations relating to a subsurface fire at the Bridgeton landfill.

“After years of hard-fought litigation, we have reached an agreement that holds Bridgeton (Bridgeton Landfill LLC) accountable and recognizes the ongoing challenges faced by community,” Hawley said in a news release Friday. “This agreement provides a path forward to ensure that the site will remain controlled and stable, and that it will continue to be closely monitored and studied under the supervision of the state. This agreement does not end our engagement with the landfill, but rather represents an ongoing commitment to ensure the site is controlled, and the community protected. Our hope is that this settlement is a first step toward allowing the community to begin the healing process.”

Hawley spokeswoman Mary Compton tells Missourinet the Bridgeton landfill and the West Lake landfill are two separate landfills. They are near each other.

The Bridgeton landfill is located on St. Charles Rock Road in Bridgeton.

Attorney General Hawley notes that since the lawsuit was filed, Republic Services Inc. has spent more than $200 million “to address the effects of the subsurface fire.”

State Rep. Mark Matthiesen, R-Maryland Heights, has said that the landfill issue is the “number one issue” to residents in Bridgeton and Maryland Heights.