You are here: Home / Legislature / Governor to sign next Missouri state budget today 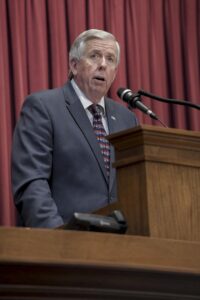 The financial blueprint would give annual state employee pay increases of $700 beginning in January for workers earning less than $70,000. State prison guards would get an extra $350-per-year raise on top of the $700.

The fiscal outline reduces the Missouri Department of Health and Senior Service’s budget by $1 million. The cut is in response to the department’s refusal to provide details about the number of Missourians who have tested positive for the tick-borne Bourbon virus.