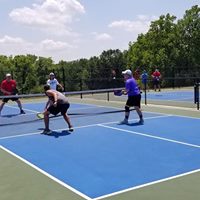 On June 7-10, the Show-Me State Games kicked off summer with events including volleyball, golf, basketball and pickleball, as well as the Missouri State Senior Games.  Over the course of 4 days, senior athletes from across the state and country traveled to Columbia to compete in about 25 events. This year, the Senior Games was a qualifying event for the 2019 National Summer Senior Games in Albuquerque, New Mexico.

It was a record year for pickleball with more than 275 pickleball players who competed in more than 800 games.  More than a dozen states were represented with competitors ranging in age from 11 to 80.The Show-Me State Games will offer more events the weekends of July 20-22 and 27-29. Registration is currently open for all sports including the Games’ largest events – basketball, baseball, soccer and softball. Find all the details on the more than 40 SMSG events at www.smsg.org/sports

The July Games will kick off with the final two legs of the Shelter Insurance Torch Run. The Torch will be in Jefferson City on July 20 at 11 a.m. at the Governor’s Garden.  At 3 p.m. on July 20, the Torch will be run from the University of Missouri to Shelter Insurance.  In addition, the Opening Ceremony, which will feature the lighting of the cauldron and a parade of athletes, will be held July 20 at 7 p.m. at Mizzou Arena.  Participants have the option of representing their sport as they parade into the Opening Ceremony. Entry is free and open to all of the public.