State Sen. Doug Libla, R-Poplar Bluff, says slapping U.S. trading partner Mexico with a 25% tariff on steel imports without taxing imports on finished products is devastating American manufacturers. Libla, the former owner of Mid Continent Nail Corporation, is responding to the southeast Missouri factory laying off 60 temporary workers and plans to reduce its workforce by 200 jobs at the end of July. Company officials blame the Trump administration’s new tariff for the Poplar Bluff business’s rapid downward spiral – one that could ultimately run the non-union plant out of business around Labor Day and hurt other allies in the process. 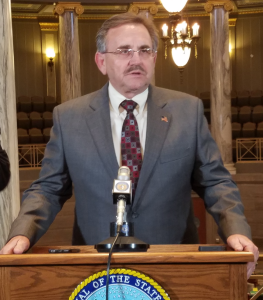 “It’s not just their (Mid Continent) employment but all the ancillary companies that provide services and goods to the plant in Poplar Bluff and other companies in southeast Missouri,” Libla says. “So this is not an isolated incident but Mid Continent Nails sticks out because they’ll be the first to see the hits.”

Average pay for the remaining 440 factory workers is $12.50 an hour. Mid Continent, which is the last major nail supplier in the country, has experienced a 50% decline in sales since the tariff on steel imports began on June 1. The tariff has increased Mid Continent’s prices – driving customers to buy cheaper nails elsewhere.

Libla says the Trump administration’s move to renegotiate the NAFTA agreement is fine but he says the U.S. should also be taxing imports on finished goods from other countries. The United States, Mexico and Canada make up the North America Free Trade Agreement, known as NAFTA, and negotiations have been slow for several months.

“Our own government, we have spent millions of dollars and years of time prosecuting unfair trade cases against China and other countries for dumping products in our countries on the finished price of nails,” Libla says. “Ever since China was accepted in to the World Trade Organization in 2001, it’s really been going downhill ever since then.”

The business of 31 years could be saved if the federal government grants exemptions in a matter of days that would allow the factory to get raw materials from its own company, Mexico-based Deacero, without being taxed. Mid Continent, like several other U.S. companies, is getting caught up in a long line of bureaucratic red tape. The U.S. Commerce Department is handling about 20,000 requests for exemptions.

“I’m of the party that we’re supposed to be cutting red tape,” Libla says. “It’s apparent to me that we are increasing the amount of red tape. The tortoise movement of how government operates, industry doesn’t have this luxury of months and months of legal wrangling. Businesses have to respond to what’s in front of them at the time.”

Libla and company officials have met with Gov. Mike Parson, R, about the issue. Mid Continent has also requested a meeting with U.S. Commerce Secretary Wilbur Ross. No meeting has been scheduled at this time.