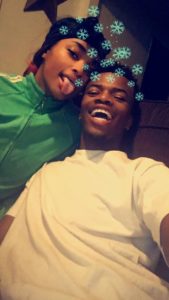 Based on further investigation today, Kansas City police can no longer confirm that a 15-year-old girl was abducted on Thursday. An AMBER Alert has been cancelled for Brajean Sledge of Kansas City.

Authorities continue to be very concerned about Sledge’s safety and she is still considered missing and endangered. Police continue to actively look for her.

Sledge is believed to be in the company of Anthony King. He is a person of interest in several crimes stemming from Sledge’s disappearance.

King is described as a black male, 18 years old, 5’ 08” 140 pounds. He was last seen wearing a gray hooded sweatshirt. (Pictured with Sledge in attached picture).

If anyone sees the child, suspect, associate, or has information related to the incident, dial 911.