(NASCAR, INDYCAR, F1)—The quote of the weekend came from none of the three series we regularly cover in this space.  It came from France, in pre-dawn darkness.

“Tell me if you want another stint. I’ve got into the rhythm of the night!”

Two-time Formula 1 Champion Fernando Alonso, racing at night for the first time in his career, was doing something remarkable  in the LeMans 24-Hours, and was hoping his team manager would let him stay in the car for another three-hour shift. 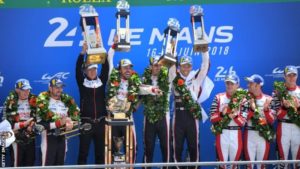 Alonso (second from left with trophy) and his two co-drivers won the world’s most famous endurance race, giving Toyota its first overall LeMans win in twenty tries.  The race was Alonso’s first at LeMans. Both of Toyota’s entries were hybrid (gas-electric power) cars, the only ones in the top class racing in the 24-Hours this year.

Alonso now has won two-thirds of racing’s triple crown: the Grand Prix of Monaco, the Lemans 24-Hours, and the Indianapolis 500.  Only one other driver in motorsports history has won all three—Graham Hill, who won the 500 in 1966.  Hill, like Alonso, also won two F1 titles.  Hill won at Monaco five times. Alonso has won twice. He also is one of only six drivers in racing history to win at Monaco and at LeMans.

Alonso took over his car from Sebastien Buemi when it was trailing the other Toyota team car by more than two minutes, about two-thirds of a lap. In the night, with more than fifty other cars of varying classes and speeds on the track with him, Alonso started carving three to five seconds off the other Toyota’s lead with almost every lap.  As his three-hour stint neared and end, he hinted that he would like to stay in the cockpit for another stint. But the team manager opted to replace him with teammate Kazuki Nakajima who took the lead for good in the sixteenth hour.

Speculation now increases about Alonso’s return to Indianapolis where he led 27 laps last year and was in contention for the lead as the laps wound down when his engine gave up. He drove a McLaren-sponsored car for Andretti Autosports and was a popular presence with fans and competitors.

Alonso drives for McLaren in F1 and has been disappointed that the cars have been uncompetitive regardless of whether they are Honda or Renault-powered. He admits he has a “big decision” to make about where and what he races next year.

He told Sky Sports he wants to win the triple crown because, “These are the three biggest races in the world…It is challenging because all three require different style and a different driving technique. If you challenge yourself and try to be the best in all areas, you have to be a compete driver. I don’t want to just be a good driver, I want to be a complete driver and hopefully the best driver in the world.”

McLaren Racing representatives met with prospective partner teams at the Indianapolis Motor Speedway last month.  RoadandTrack.com reported more discussion were likely during the summer.  Team Boss has indicated that McLaren is interested in a full-time IndyCar program in addition to its Formula 1 teams.

NASCAR hits a road course for the first time this year. The Sunday afternoon race will be at Sonoma, California.

IndyCar also will be on a road course—Road America in Elkhart Lake, Wisconsin next Sunday afternoon.

And of course, Formula 1 will be a road course.  The series returns to France for the first time in a decade and will run on the course at the feudal village of La Castellet in Provence.