(NASCAR)—A late-race gamble by Clint Bowyer’s crew chief has paid off with Bowyer’s second win of the season. The race at Brooklyn, Michigan ended 67 laps short of the regulation 200 laps when heavy rain drenched the track for the second time.

Bowyer’s crew chief called for a two-tire change during the last round of pit stops while other drivers were taking four tires, knowing rain was approaching and the race was likely to be a sprint to a red flag.  Bowyer got in front of teammate Kevin Harvick on the last turn of the first green-flag lap after the pit stops and held him off the rest of the way. 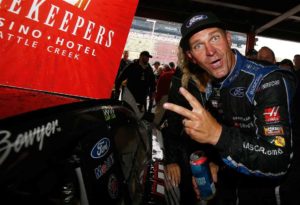 He caught a break when Ricky Stenhouse Jr., spun on lap 126 and rain moved in while the field was still under caution.  “I was like, ‘It better rain quick because one more lap and he’s going to get me.’” Bowyer said afterwards.

It is his second win of the year. He won earlier this year at Martinsville, a race delayed by snow.  He, Harvick, and pole-sitter Kurt Busch gave Stewart-Haas Racing a 1-2-3 finish.

Joplin’s Jamie McMurray ran strongly in the second half of the race and was as high as sixth at one point. He was tenth when the rain washed out the last sixty-seven laps.  It was his third top-ten of the year and moved him to nineteenth in the overall point standings. He’s still 44 points below the last of the sixteen playoff spots.  Bowyer, who is fifth in overall points, has a playoff slot locked up because he has a win this year.

NASCAR is off next weekend for Father’s Day and will return to racing on the Sonoma road course in California on the 24th.

(IndyCar)—Scott Dixon has taken a strong grip on the IndyCar points lead after moving into the lead about halfway through Saturday night’s race at the Texas Motor Speedway.  Dixon, who started seventh took the lead on the 130th lap and led the last 119 circuits, finishing 4.3 seconds ahead of Simon Pagenaud, who gained his best finish of the season by holding off Alexander Rossi.

There were eight lead changes before he took command, and plenty of action throughout the race. Race officials counted 686 on-track passes. 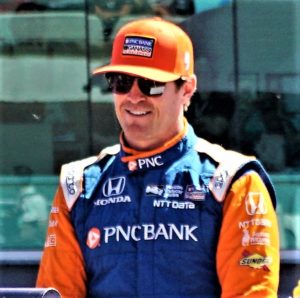 The win is the 43rd win in Dixon’s eighteen-year career, the second win this year.  Last year as the first year since 2004 that he did not win more than one race.  Only A. J. Foyt and Mario Andretti have more victories in Indianapolis-car competition. “When you look at those names—A. J. Foyt, Mario Andretti, Michael Andretti, the Unsers—to me it still seems very strange that ‘Dixon’ is on that list, too,” he said after the race. And there could be several more wins ahead. Dixon is only 37 (until July 22).

IndyCar is off next weekend. The next race is at Road America in Elkhart Lake, Wisconsin on June 24.

Canada was the second race in a row that some drivers found boring, with little overtaking. Ricciardo said afterwards, “I know everyone loves going fast and so do I,” he said, “but I would rather go slower and have more fighting.”  Vettel, however, was having none of that kind of talk. “I don’t know why people today are so short-sighted. We had seven races this year some were phenomenal and some will be exciting but I guarantee you people will watch it. It can’t always go up. There are no reasons, so don’t look for the answer,” he said.