(NASCAR)—Defending NASCAR champion Martin Truex Jr., breaks up the Kevin and Kyle show with a going-away win at Pocono.

It’s the second win of the year for Truex.  Kevin Harvick, who has five wins, led the majority of laps.  Kyle Busch, who has four wins, was leading until a debris caution came out twenty laps from the end.  Truex got the break on the restart, led the last twenty-one laps and finished two and a half seconds ahead of Kyle Larson. Busch was third and Harvick was fourth.

Harvick, Busch, and Truex have won eleven of the fourteen points races this season. 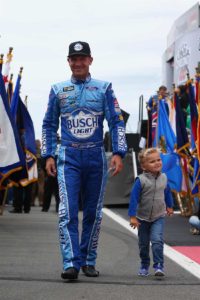 The winner of one of the other races, Clint Bowyer (right, with son Cash in the Pocono pits), ran well most of the day before having a late-race problem that dropped him to twentieth at the end.  His earlier victory has qualified him for the 16-driver playoff series of races. He is sixth in overall points.

Austin Dillon and Joey Logano are the only other winners so far.

Joplin’s Jamie McMurray was fifteenth and is fifty-seven points out of the last position for a playoff slot.  The playoffs will be set in twelve more races.

NASCAR moves on to the Michigan International Speedway next Sunday.

The race was the 350th career IndyCar start for Tony Kanaan. Only Mario Andretti (407) and Foyt (369) have more starts in the series.

The Sunday race at Belle Isle began with an embarrassing crash of the pace car driven by GM Executive VP of Global Product Development, Mark Reuss on the pace lap. Neither he nor a passenger was hurt.

The race went to Hunter-Reay by 11.3 seconds over Indianapolis 500 winner Will Power.  It was Hunter-Reay’s first win at Pocono since August, 2015 and prompted him to celebrate by taking a dip in the park’s James Scott Memorial Fountain.

Hunter-Reay was so far behind Alexander Rossi after the last round of pit stops that he could not see him on the main straight away.  But he ripped off the five fastest laps of the race in the last seventeen laps  to run down Rossi, who then made a mistake on braking and wound up on the access road—and in twelfth place at the end.

Power leaves Detroit with a four-point lead in the standings over Dixon. Ross is eleven points back in third.

(Formula 1)—The engines were quiet in F1 this weekend.  They’ll be fired up next for the Grand Prix of Canada at the Circuit Gilles Villeneuve in Montreal.