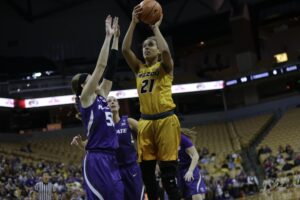 Mizzou junior forward Cierra Porter has decided to forgo her final year of collegiate eligibility and medically retire. Porter completed her graduation requirements in May and will pursue professional opportunities outside of basketball.

“There are not enough words to express my gratitude toward my Aunt (Coach Pingeton), the rest of the amazing staff, my teammates who became my sisters, my supportive and loving family, the world’s best fans, and the countless other people that made my time at Mizzou so incredible,” said Porter. “I have memories that I will carry with me forever. Now that I have my degree, I have decided to shift my focus toward my future quality of life and that means saying goodbye to the sport I love. While it was the hardest decision I’ve ever made, I’m excited for what God has planned for my life moving forward. I appreciate Mizzou nation so much, and I am forever a Tiger!”

“Cierra has been a vital member of our program for the past three years and we can’t thank her enough for her contributions,” said head coach Robin Pingeton. “This was obviously a very difficult decision for Cierra, but one that we fully support. Cierra has played through much pain with ongoing knee issues over the last several years and there comes a point where you have to put long term quality of life ahead of everything else. It is remarkable what she has been able to contribute to our program despite never being fully healthy. Cierra graduated in three years with a 3.8 GPA, and there is no doubt she has a very bright future ahead of her. Although we will miss Cierra, we wish her nothing but the very best and are excited for the next chapter in her life.”

In three years for Mizzou, Porter averaged 10.6 points and 7.0 rebounds per game while recording 98 blocks and 68 steals. Porter earned All-SEC Freshman Team honors in 2015-16 after scoring 8.6 points and grabbing 5.4 rebounds per game. Her 266 total points in her debut season rank as the tenth-most in school history. Among program records, Porter ranks fifth in seventh all-time in free-throw percentage (.793) and career rebounding average (7.0), and ninth in free throws made in a season (141, 2016-17).