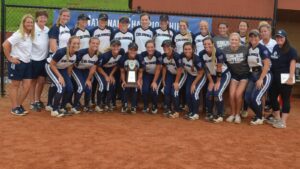 No. 4 seed Science & Arts (Okla.) and No. 10 Columbia (Mo.) met up in the 38th annual NAIA Softball World Series title game today in Clermont, Fla., at the Legends Way Ballfields. Both teams were playing in their first-ever softball national championship contest. The event was hosted by PFX Athletics for the second-straight year.

USAO needed one win for the title and Columbia needed two wins for the title. Science & Arts was the only undefeated team remaining with a 3-0 mark prior to the game today. One of the wins was against Columbia on Wednesday night, 7-6, in nine innings. Playing in its fourth all-time World Series, the Drovers stand 9-8 all-time in the event. The last time a No. 4 seed won it all was back in 1993. Former-member West Florida defeated Oklahoma City by a 4-2 score. The Drovers were attempting to bring home a title to the state of Oklahoma for the 11th time – Oklahoma City owns 10 of those red banners. Offensively, Randa Hatter is hitting .571 (4-for-7) with four runs scored and a homer. Chloe Clifton leads the team with seven RBI’s in three games, including two game-winning doubles that drove in four. Columbia held a 4-1 World Series record in this event prior to the game today. The Cougars won their first three games before the loss Wednesday to Science & Arts. In their 17th World Series, Columbia holds a 21-35 record. Molly Carter is the offensive leader for Columbia batting .400 (6-for-15) with two home runs, four RBI’s, and six runs scored in five games. The last time a No. 10 seed won the World Series was in 2012 when former-member Shorter (Ga.) took a 1-0, nine-inning victory over Oklahoma City.

The energy was high as both teams took the field today, where only one would come out as a National Champion. After an amazing post season run, the Cougars fell to Science & Arts (Okla.) by a score of 4-1 as they had their best finish in history claiming second place as a 10th seed. They conclude the season with a record of 38-15.

Offensively for the Cougars, Dummitt was able to get things going as she tripled to get on base early for Columbia. Sullivan was able to drive in Dummitt to get on the board early leading 1-0. However in the bottom of the third, the Drovers had a surge of their own as they tied the game on a wild pitch and then followed that up with a three run homerun to take a 4-1 lead over Columbia. The Cougars continued to battle, but would come up short as the Drovers third inning offense proved to be enough to overcome Columbia.

After the game the All-World Series team was announced where three Cougars were honored for their performances, including senior Alexandra Linck, junior Molly Carter, and freshman Lexi Dickerson.