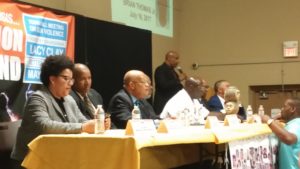 ”It’s an obscenity. And it’s an insult to good people like you. And doing something to stop gun violence begins with us. Right here, tonight.”

The group is also hosting a “United March Against Gun Violence”- scheduled for June 2nd at 10 am at the St. Alphonsus Rock in St. Louis.