Missouri legislative leaders will sign bills passed in the last session today, which is the final day in which they’re required to complete the task. 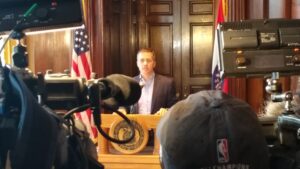 Governor Eric Greitens’ resignation will ease the process for Republican President Pro Tem Ron Richard of Joplin, who said numerous times he’d be resistant to sending legislation to the embattled head of state.

All but a few of the 143 measures approved during the session will need to be signed by Richard and Republican House Speaker Todd Richardson of Poplar Bluff.

Greitens had previously signed a bill calling for signage at certain businesses listing the human trafficking hotline.  He also signed two measures appropriating money in the state’s budget and a resolution to move a union-backed ballot measure from November to the August primary election.

Earlier this month, Greitens’ non-profit group that doesn’t report its donors, A New Missouri, contributed $500,000 to the group Freedom to Work which supports right to work.

The bills signed today by Richard and Richardson will presumably be signed into law by the current Lieutenant governor, Republican Mike Parson, who will take over as governor after being sworn into the office.  That’ll likely take place shortly after Greitens officially vacates his seat Friday at 5 p.m., although Greitens could sign or veto bills until that point.

According to his office, Parson was moving cattle on his farm in Bolivar when he learned that Governor Greitens, a fellow GOP member, had resigned at roughly 4:30 p.m. Tuesday.  Parson released a statement saying Greitens put the state’s best interest at the forefront with his decision.

“This is a decision that will allow our state to heal and move forward from what has been a difficult time,” said Parson.  “This is an enormous responsibility serving as our state’s next governor, and I am ready to fulfill the duties of the office with honor and integrity.”

With Greitens’ announcement that he’s leaving office, the special House committee investigating him has canceled its remaining hearings this week.

The gatherings had developed into heated exchanges as Republican committee Chairman Jay Barnes lashed into defense lawyers for refusing to comply with requests for documents from a criminal court case involving Greitens.

Now, the House committee has nothing to pursue as its purpose to consider whether Greitens should face impeachment or other penalties no longer exists with his departure.

The panel had just started its probe during the special session into whether Greitens had violated campaign finance laws.

Early political advisor Michael Hafner testified before the committee Tuesday.  He said he’d had discussions with donors on how their identities could be concealed through the establishment of a 501 (c) (4) that wouldn’t have to report contributors.

“We discussed specifically nonprofits and (c) (4)’s and what the process would be to establish entities like that to accept contributions for funneling contributions,” said Hafner.

During the hearing, Hafner said he’d been paid in excess of $500 by Greitens in January of 2015, prior to Greitens establishment of a campaign committee on February 25th, 2015.  Missouri Ethics Commission rules require candidates for statewide office to form a committee if they receive or spend more than $500.

Hafner indicated Greitens may have contacted individuals he knew while attending Oxford University in England, where he earned his doctorate degree.  Federal law prohibits campaigns and political committees from soliciting or accepting contributions from foreign nationals.

Hafner noted that he left the campaign in March 2015 but said Greitens had plans to work with two people — Alex Rogers and Monu Joseph — as contacts who would seek overseas donations.  In earlier testimony before the House committee, he identified both individuals.

Rogers is the managing partner of the private investment firm Harber Vest with offices in Boston and Hong Kong while Joseph is a partner in Emerald Crest Capital Partners in Costa Mesa, California.

Hafner also shed light Tuesday on Greitens’ recent affiliation with the Republican Party.  He noted Greiten had ties to several Democrats, including former Governor Bob Holden, and said he was given training to familiarize himself with conservative principles.

“There were numerous policy sessions and other things that people held with Eric in 2014, in late 2014, people that we introduced him to, that were helping him through conservative policies,” said Hafner.

Greitens flirted with the idea of running for a congressional seat as a Democrat in Missouri as recently as 2010.

In December 2017, his office released a statement in preparation for the 2018 legislative session, saying work had begun on a strong conservative agenda.  A little more than a month later, a St. Louis TV station would reveal an extramarital affair and alleged abusive behavior that would start the unraveling of Eric Greitens’ political career.