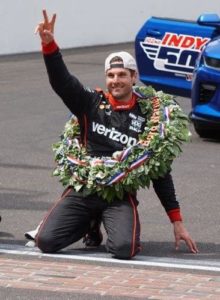 Power got to kiss the bricks in his eleventh race at the historic speedway, and so did his boss, Roger Penske, whose drivers now have won the race seventeen times. 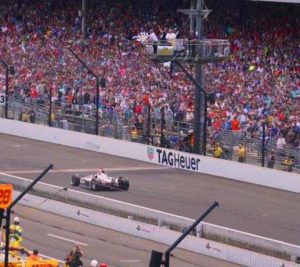 Power started from the middle of the first row and beat pole-sitter Ed Carpenter by about 3.2 seconds. He and Carpenter led  124 of the 200 laps,  A dozen other drivers also led laps. There were 31 lead changes.

Power took the lead with four laps left with when two cars ahead of him had to go to the pits for a splash of fuel. The 2008 winner of the race, Scott Dixon, finished third but could not launch a challenge for the lead because he, too, was short of fuel.  Alexander Rossi, the 2016 winner, was fourth after starting 32nd.  Ryan Hunter-Reay, the 2012 winner, was fifth.

Helio Castroneves, who ran in the top five all day, crashed late and finished 27th.  Danica Patrick’s last race also ended with a crash on the 67th lap, leaving her 30th.  Last year’s winner, Takuma Sato, was eliminated when he collided with James Davidson’s slow moving car. Davidson finished last and Sato 32nd.  But he stayed in uniform at the track until the end of the race when he congratulated Power in victory lane.

Power also won the Grand Prix of Indy two weeks ago on the Speedway road course. He is the first driver to win both events in the same month.

NASCAR)—-The day’s longest race was a record-breaker for Kyle Busch, who led 377 of the 400 laps in the World 600 at Charlotte. It’s his first points win there, making him the only driver to have won at every track on which he has started race.  He also has become the tenth driver in NASCAR history to lead at least 15,000 laps.  He’s about 3,500 behind Jimmie  Johnson, and about 4,800 behind retired Missouri driver Rusty Wallace.

Martin Truex, Jr., finished second followed by Denny Hamlin, Brad Keselowski, and Jimmie Johnson.  Joplin driver Jamie McMurray finished sixth, only his second top-ten this year in thirteen races.  But the race did move him from 24th to 20th in the points although he remains 65 out of sixteenth, the final position for the playoffs.

Before the race, NASCAR announced the new members of its Hall of Fame. Missouri great Larry Phillips failed again to get enough votes.  The five who were elected were drivers Jeff Gordon, Davey Allison, and Alan Kulwicki, along with team owners Jack Roush and Roger Penske.

(FORMULA 1)—Two of the competitors thought this year’s Monaco Grand Prix was just plain boring. Daniel Ricciardo of team Red Bull  thought it was just fine.  Ricciardo won the race, holding off Ferrari’s Sebastian Vettel by one second despite fighting power problems for the last half of the race.  Points leader Lewis Hamilton was third.

The three drivers have each won two races this year to rank 1-2-3 in the points (Hamilton, Vettel, Ricciardo) and the number two drivers of each team rank 4-5-6.

Hamilton said the race was ”intensely boring, Oh, my God, yes.”  And Fernando Alonso called it the most boring race in Formula 1 history.