A special House committee heard testimony Thursday from an attorney involved in allegations that have led to the possible impeachment of Governor Eric Greitens. 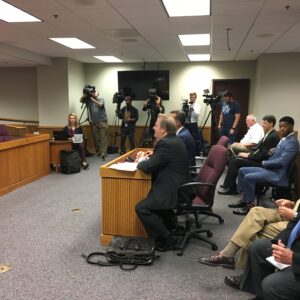 Over the course to his lengthy testimony before the committee, Watkins intensely defended the credibility of his client, used vulgar language to the point of being scolded several times by the committee chairman and provided insight into a large sum he was provided with.

Newspaper publisher Scott Faughn told the committee Wednesday he gave Watkins $100,000 to secure a recording the ex-husband secretly made of the woman describing an encounter in which Greitens allegedly threatened to blackmail her.

Greitens is alleged to have taken a nonconsensual photo of the woman while she undressed, bound and blindfolded and then threatened to distribute it if she spoke his name.

During the hearing, Watkins continually stated that he didn’t care where the money had come from but made it clear that Faughn told him it was from a wealthy out of state Republican donor.

Watkins said he came to believe the donor had an ax to grind with Greitens.

Wednesday, Faughn told the panel that the total of $120,000 he doled out to Watkins was all his money and refused to say how he acquired it, contending the inner workings of his business were private.

Faughn said he wanted the recording to use as research in a book he was writing about Greitens.  During his appearance Thursday, Watkins took offense with the characterization by several committee members that he sold the recording to Faughn.

He denied that Faughn gave him $100,000 to obtain the recording, instead saying the money was meant to cover the ex-husband’s legal fees.

Watkins said the ex-husband still owed him money even after the $100,000 was applied to his bill.  Watkins further said that Faughn paid him $10,000 for legal representation and $10,000 so he could get his family out of the St. Louis area during an unsettling point in time related to the recording.

Faughn told the committee he gave Watkins $20,000 to retain him as an attorney in the case, although he couldn’t point to any legal advice Watkins had given him.

Watkins described receiving the first of two $50,000 cash payments directly from Faughn in a large brown wrap-around folder.  He said the second one came in a Fed-Ex folder from a courier named either Skyler or Striker.

Watkins engaged in several heated exchanges with Chairman Barnes over the course of his testimony and laced his language with profanities.

He also inadvertently stated his client’s last name several times and his first name once while engaged in disagreements with Barnes or other committee members.  Watkins has called numerous times for the identities of the ex-husband and the woman involved with Greitens to be kept secret to protect their privacy.  Neither one had been identified in a public setting before Thursday’s hearing.

Watkins became especially frustrated when asked about a discrepancy in his testimony.

Barnes pointed out that Watkins had previously portrayed his client as not wanting to release the recording of the ex-wife describing her encounter with Greitens for fear it would subject their kids to undue harm.  Barnes noted Watkins then said the ex-husband readily released the recording in early January.

Watkins loudly exclaimed that his client could have easily hurt Greitens by releasing his recording before the 2016 election.

“He loved his wife,” said Watkins.  “He absolutely was abjectly horrified, mortified and completely shattered by the actions of a guy with square-toed boots and lifts. Ultimately, my client could have devastated that guy, the guy with the veneer teeth if he had released those tapes prior to the election.”

Mr. Watkins claimed his client had a change of heart when one of the onslaught of calls from media members about the recording was fielded by his stepdaughter, referring to the incident as the tipping point.

KMOV-TV did a story with the ex-husband which included significant portions of the secret recording he’d made while conversing with his wife about the encounter with Greitens.

Watkins said it was Governor Greitens himself who led to media outlets releasing the recording when he acknowledged the affair with the woman on the night of his State of the State speech.  “They did not have corroboration,” Watkins said.  “The governor himself provided the corroboration which triggered the release of the story.”

Chairman Barnes made it known during the hearing that the committee had come to the conclusion that the ex-husband had no credibility.

“We’re at the infinitesimal level of credibility that the committee views for the ex-husband right now,” said Barnes.

Barnes said that the woman told the committee she had received calls from the media about the recording and concluded the only way that could have happened is if the ex-husband had said something.

Barnes also confronted Watkins with previous testimony from a witness who said the campaign of Greitens Democratic opponent in the governor’s race, Chris Koster, knew about the alleged encounter between Greitens and the woman.  Barnes asked how the opposition campaign would have known about the affair if not through the ex-husband.

Watkins responded by saying it was the worst kept secret of 2015 and noted that various media outlets had been working on the story for a year.

Watkins said he provided a photo of a cash delivery from Faughn to the FBI in January.  Barnes said he first learned that $100,000 had been delivered to Watkins from the FBI earlier this year.