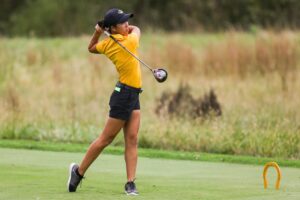 University of Missouri sophomore golfer Jess Yuen (Bolingbrook, Ill.) closed her historic 2017-18 season by tying for 57th place at the 2018 NCAA Women’s Golf National Championship, held at Karsten Creek Golf Club in Stillwater, Okla. The finish was the highest-ever showing at the NCAA Championships by a Tiger women’s golfer, surpassing the previous standard of 61st place by Kristen Samp in 1996.

Yuen shot a five-over par 77 in Sunday’s third round, and her 10-over total of 226 was just shy of advancing to Monday’s final championship round. Yuen finished five strokes off the cut line, as 221 (five over) was the cut off for individual advancement. She had entered the day just two shots shy of the unofficial cut line, and she was still there on Sunday as she stood two over on the day through 11 holes. However, a quadruple bogey on the par-four 12th hole derailed her plans, and not even a birdie on the par-three 15th could make up for it.

It was essentially two holes that kept Yuen from being in position to advance to Monday’s final round. Seven of her 10 shots over par for the three rounds came on just two holes – Sunday’s quadruple bogey, and a triple-bogey seven on the par-four 17th on Saturday. In her 52 other holes during the three days, Yuen was just a combined three over par (eight bogeys and five birdies to go with 39 pars).

Yuen entered the championship ranked 60th in the nation individually, and she fired an opening-round even-par 72 on Friday, and stood tied for 11th. A five-over 77 on Saturday bumped her to 35th place, prior to Sunday’s final results.