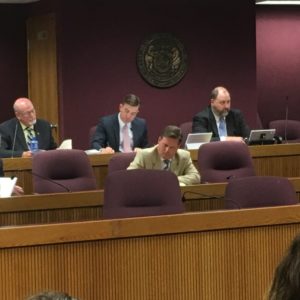 A resolution was issued by the House late Friday authorizing the committee to recommend disciplinary action, including articles of impeachment against the governor.

The resolution also laid ground rules for how the investigation and possible impeachment will be handled.  Nine rules were specified in the resolution.

Among other things, the special House committee will determine the individuals that’ll be subpoenaed to testify before it as witnesses and only committee members will be permitted to question the witnesses.

The committee, on a majority vote, can close a hearing from the press and public to hear from certain witnesses and choose to protect the identity or privacy of any witness by redacting names, testimony and evidence in transcripts it releases.

That stipulation could pave the way for an unidentified woman central to allegations of physical assault and sexual abuse against Greitens to remain anonymous.

An alleged 2015 encounter with the woman led to a felony invasion of privacy charge against Greitens by a grand jury in St. Louis.  He was accused of taking and transmitting a non-consensual photo of the woman while she was undressed, bound and blindfolded.

The charge was dropped although the St. Louis Circuit Attorney’s office has said it will be refiled.  Circuit Attorney Kim Gardner says Jackson County Prosecuting Attorney Jean Peters Baker, D, has agreed to serve as the special prosecutor handling that charge.

The House special committee has also collected information about a second felony case involving Greitens.  He’s charged with felony computer tampering for allegedly obtaining and transferring a donor list from his former charity without permission for campaign purposes.

Greitens has admitted to an extramarital affair with the woman but denies any criminal wrongdoing.

The rules as stated in the resolution do not give attorneys representing the governor’s office powers they were seeking to call witnesses and cross-examine them.

The committee’s chairman, Republican Rep. Jay Barnes of Jefferson City and Greim tangled over whether Greitens should be afforded due process and whether the attorneys would have subpoena power and the right to cross-examination.

The rules allow the committee to force witnesses to testify and produce documents, enabling it to punish disobedience of its authority.  The resolution states that the rules of civil and criminal procedure in court cases do not apply to the special House committee’s hearing or to the consideration of findings or recommendations the committee sends to the full House.

Subpoenas for witnesses to appear will be issued by the Speaker of the House, Republican Representative Todd Richardson of Poplar Bluff.  All witnesses will have right to a lawyer.  Those attorneys will be allowed to make written and oral presentations before the committee.

The resolution expanded the size of the special House committee from seven to ten members with no more than seven of them from one party.

The resolution issued Friday is a continuation of a similar document adopted by the House on March 1st to set ground rules for the special committee when it was originally formed.

The updated resolution is sponsored jointly by Chairman Barnes and the ranking Democrat on the committee, Representative Gina Mitten of St. Louis.  It could be amended by the committee when it meets Tuesday.

The committee has scheduled hearings Tuesday through Friday as it’s working on a tight time schedule.  The special session is limited to 30 days and must be completed by June 17th.