(INDYCAR)—The 102nd running of the Indianapolis 500 will have a familiar face on the pole and another familiar face watching from somewhere other than in a driver’s seat. 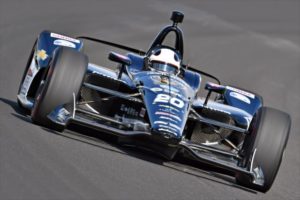 Ed Carpenter surprised himself with a 230 mph on his first qualifying lap and finished with an average of 229.618 to claim his third pole for the big race. Joining him on the front row will be Simon Pagenaud and Will Power.  Neither of the three drivers has won the 500 in a combined 33 starts. They have started on the front row ten times.  None of the drivers in the second row—defending series champion Josef Newgarden, Seastien Bourdais, and Spencer Pigot—have won the race, either.

Helio Castroneves, who had the fast time on bump day, 228,919, Saturday, could not match that run and will start eighth, between Danica Patrick and Scott Dixon in the third row. Castroneves, a four-time pole-starter, is desperate to join A. J. Foyt, Rick Mears, and Al Unser Sr., as a four-time winner of the race. He was second last year to Takuma Sato.  Patrick says this is her last race of any kind. Dixon, also a three-time pole winner, is looking for his second win.  He won the race in 2008.

Sato hopes to repeat but starts sixteenth.  The 2016 winner, Alexander Rossi, had a big drop-off in speed and will start thirty-second, in the middle of the last row.  The 2013 winner, Tony Kanaan, starts tenth.  The winner from 2014, Ryan Hunter Reay is fourteenth.

Two drivers failed to make the field: the popular James Hinchcliffe, who started from the pole two years ago, and six-time competitor Pippa Mann didn’t make the 33-car field in bump day qualifying. Hinchcliff’s four-lap, ten-mile run was .012 second or .369 mph short of making the starting field for the seventh time.

(NASCAR)—Kevin Harvick gets his biggest winner’s paycheck of the year with a win in NASCAR’s annual All-Star Race at Charlotte.

Several contenders were wiped out in an eight-car crash in the third segment of the race when Martin Truex appeared to move down the track, forcing Ricky Stenhouse, Jr., to the apron before Stenhouse’s right front fender touch Truex’s left rear, sending him up the track and into Kurt Busch’s car.  Kyle Busch had nowhere to go and was caught in the middle.

Clint Bowyer (car 14), Truex, Kurt Busch, and Brad Keselowski got the worst of it and could not continue to the finish.  Jamie McMurray (car 1) slipped past the carnage.

Harvick took the lead on an overtime restart and go to the finish line ahead of Daniel Suarez to win the one-million dollars given to the winner of the All-Star race.  Joey Logano, Denny Hamlin, and Chase Elliott rounded out the top five.

The race was run with some experimental features on the cars intended to make for more passing and closer racing—restrictor plates on the engines, a bigger spoiler, and front air ducts that pushed air through the front wheel wells.  The experiment is considered a general success. NASCAR says it will use the results to negotiate for the aero and engine package for 2019.

This race involved no points.  Next week, NASCAR stays at Charlotte for its longest race of the year—600 miles on Memorial Weekend Sunday night.

(FORMULA 1)—The streets of Monaco will welcome Formula 1 next weekend with Mercedes driver Lewis Hamilton hoping to expand his points lead over rival Sebastian Vettel.  Hamilton has bolted to a seventeen-point edge over Vettel. His teammate, Valtteri Bottas, runs third, thirty-seven back of Hamilton.

Monaco is the sixth race of the season. Vettel won the first two; Hamilton has won the most recent two.  Daniel Ricciardo, who is fourth in points, won the third race of the year.  The season has 21 races.

The largest controversy of the week in F1 has involved rear view mirrors.  Before the most recent race, the Azerbaijan Grand Prix, series sanctioning body FIA announced it would allow the mirrors to be mounted on the cockpit halo, the protective ring that protects drivers from flying debris.

Ferrari drew criticism from other teams that felt the mirror mount used by Ferrari used a winglet that improved aerodynamics.  The FIA allowed Ferrari to use the design for that race but told Ferrari the feature would not be allowed for Monaco or other races.  The organization has issued a technical bulletin giving more specific instructions on the proper mirror mounts.  That’s good enough for now but the FIA plans to keep tinkering with the rule and hopes to have something with which everyone can agree for 2019.