State Auditor Nicole Galloway is seeking information on Republican Governor Eric Greitens’ possible use of private attorneys to defend him in court and in the legislature. 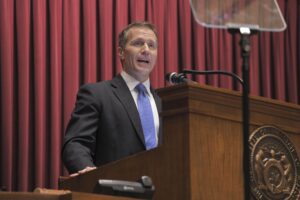 Galloway, a Democrat, distributed a letter Monday her office wrote to the governor’s office.  It asks whether state money is being used, or will be used, on private attorneys to represent him over possible disciplinary action in the upcoming special session.

The letter requests copies of proposals, bids, contracts and itemized billing connected to the use of public funds to retain private lawyers.

Greitens originally hired Washington, D.C. attorney Ross Garber in early April to represent his office, which means tax money is being used to pay Garber’s fee of $320 per hour.

Although a felony invasion of privacy charge against Greitens was dropped Monday, he faces an additional felony computer tampering charge and possible impeachment for his alleged activity related to both accusations.

Auditor Galloway’s office has requested a response to its inquiry by Friday.  A special House committee investigating Greitens is holding a hearing Wednesday morning which could also include discussion over the governor’s use of private attorneys.

In the felony case that was dropped this week, Greitens was accused of taking and transmitting a non-consensual photo of a woman who was undressed, bound and blindfolded. He’s also alleged to have taken the picture without the woman’s permission and blackmailed her to keep quiet about their extramarital affair. The prosecution has said it plans to re-file that accusation.

In the felony computer tampering case, Greitens is alleged to have obtained and transferred a donor list from his former charity without permission for campaign purposes.  A trial date has not been set for that charge.

The legislature will open a special session Friday evening to consider impeachment proceedings against Greitens following the end of the current legislative session.