(NASCAR)—Joplin NASCAR driver Jamie McMurray was headed for a decent finish—not a top ten, but at least decent—when late-race mayhem at the Kansas Speedway took him out of the race about fifteen laps from the finish.

McMurray (climbing out of his wrecked car) was caught up in a tangle of cars when William Byron lost control of his car, hit Clint Bowyer and then went into the wall.  He had nowhere to go as cars were spinning into his line.  He climbed unhurt and with a 31st place finish that knocks him seventy-one points in the standings behind the last playoff berth with the regular season nearing the halfway point. McMurray has finished on the leader’s winning lap in only four of the twelve races this year and has only one top ten. His average finish is 21st.  In the last three years when he has made the playoffs his average finish has been about fifteenth. 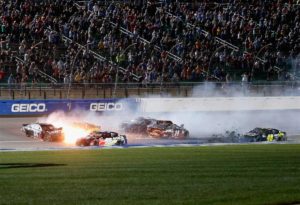 Bowyer (number 14, right) and McMurray were two of the seven drivers involved in the melee that saw Byron’s car land on the roof of Ryan Newman’s car before sliding down the track with fire in the engine compartment.  Bowyer, who had been running well inside the top ten most of the night, made it to the pits for some quick repairs that kept him on the lead lap.  He was the last car still on the winner’s lap although he was fifteenth in the final standings.

The race was stopped so the wreckage could be removed. But it also set up a big finish.

Kevin Harvick charged from sixth place when the red-flagged race was restarted with nine laps to go and took the lead away from Martin Truex Jr with one lap left and pulled away for a four-tenths of a second win.

NASCAR holds its all-star race next Saturday night in Charlotte.

Will Power has given Roger Penske his 200th IndyCar win, taking the Grand Prix of Indy for the third time in four races.  Power grabbed the lead from rookie Robert Wilkens on lap 52 of the 85-lap race on the speedway’s road course, then held off Scott Dixon to win by 2.2 seconds.

Wickens (seen chasing Power out of the pits, right) finished third after starting alongside Power on the front row.

Helio Castroneves, running his first IndyCar race of the season, finished sixth.  He now turns his attention to preparing another run for a fourth Indianapolis 500 victory. These May races are the only races Castroneves is scheduled to run in IndyCar this year.  He has moved to the Penske sports car operation.

Drivers will focus on qualifying for the 500 during practice this week.  Starting positions for the big race on Memorial Day weekend will be determined in qualifying next weekend.

(Formula1)—Lewis Hamilton Has won his second Grand Prix in a row, which might quiet those who had wondered if he and Mercedes could overcome Sebastian Vettel and Ferrari.  There was no doubt at the Grand Prix of Spain, won by Hamilton by 21 seconds over teammate Valterri Bottas His win and the fourth-place finish by Vettel gives Hamilton a seventeen-point lead in the standings.  Hamlton and Vettel are dueling to see who will become a five-time F1 champion this year.