A group of Missouri House and Senate budget conferees have just started meeting Monday afternoon before a standing-room only audience at the Statehouse in Jefferson City. 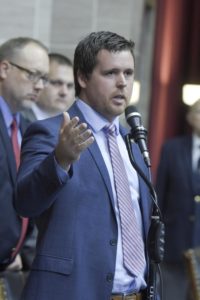 The Conference Committee on Budget was scheduled to begin meeting Monday at 2 p.m., but Senate Appropriations Committee Chairman Dan Brown, R-Rolla, told the audience that there’s been a family emergency involving a conferee or a staff member.

The meeting was delayed until later this afternoon.

Both chambers have approved approximately $28 billion state operating budgets, but there numerous differences between the two chambers.

One of those involves pay for corrections officers.

Fitzpatrick told the Capitol Press Corps in late April that the pay raise for corrections officers is a top priority for Chairman Brown.

There’s also a difference between the two chambers on sobriety checkpoints.

The Missouri Constitution requires the Legislature to approve a balanced budget by Friday evening.

That means whatever changes are approved in conference will then have to go to both the House and Senate for one more vote, by Friday evening.