With just a few days before the cutoff mark to qualify for the November election, a group has passed a hurdle to place a minimum wage hike before voters. 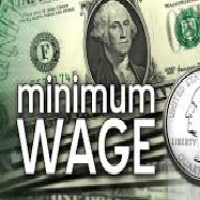 Raise Up Missouri collected the necessary signatures for its ballot initiative to qualify for final approval from the secretary of state’s office.

The organization’s Tony Wyche says, contrary to popular belief, increasing wages doesn’t result in fewer jobs.  “There are studies, study after study, that shows in states that have implemented the minimum wage, not only did they not the see losses, but most of them saw their employment rates go up,” said Wyche.

The measure would hike the minimum wage gradually for five years and top out at $12.00 per hour in 2023.  The current minimum wage in Missouri is $7.85.

Patrick Toohey with the St. Louis based free-market group Show-Me Institute differentiates between stepping up the wage over time and one-time hikes, such as the one briefly implemented in St. Louis in 2017 that mandated pay of $10 per hour.  He thinks the gradual increase is preferable.

But Toohey contends there too many negative factors that stack up against any sort of minimum pay increase.  Among other things, he points to a 2015 study which shows that hiking minimum pay hurts first-time job seekers.

“An increase in the minimum wage may cost thousands of dollars over the lifetime of an employee because there are less opportunities for that first important job,” said Toohey.

In data compiled for the study, only 12.7 percent of workers earning a wage less than $7.25 were in poor families, while 44.6 percent — or nearly half, which Show-Me Institute contends are likely teenagers or other secondary workers — were in families with incomes three times the poverty line (or approximately $63,000 in 2008 for a family of four) or higher.

Still, there are plenty of studies showing how minimum wage doesn’t have the perceived negative impact on jobs. One study from UC Berkeley researchers, suggests that California will actually gain jobs because of its minimum wage hike by 2023.

Raise Up Missouri’s Tony Wyche says boosting wages at the bottom will have a positive impact on both workers and businesses.

“Those people have more income to spend on clothing, on transportation, on housing, on food, on all of the basic necessities that drive our economy,” said Wyche.  “And that’s nothing but good news for Missouri businesses.”

The brief $10 St. Louis wage was overridden last year by the Republican-dominated state legislature and Governor Eric Greitens who said, “Despite what you hear from liberals, it will take money out of people’s pockets.”

The city passed an ordinance in 2015 that called for its minimum pay to be boosted to $10 by 2017.  A battle from a previous lawsuit over the wage increase was settled in February 2017 when the state Supreme Court overturned a lower court decision, allowing for the increase to go into effect in May 2017.

The St. Louis wage was slated to increase to $11 an hour in January 2018. But the bill passed by the legislature and signed by the governor which prohibited cities from creating a different minimum wage than the one used in the rest of the state went into effect in late August, squashing to pay increase.

The statewide ballot initiative from Raise Up Missouri won’t be subject to that law.  Backers of the measure, including 243 businesses joined under the umbrella group Missouri Business for a Fair Minimum Wage, presented the secretary of state’s office with roughly 120,000 Tuesday during their rally in Jefferson City.

Ballot initiatives that don’t change existing law or establish a constitutional amendment require signatures from 5% of registered voters in six of the state’s eight Congressional districts.

Raise Up Missouri chose to offer signatures from district’s 1, 2, 3, 5, 6 and 7 which means it needed to gather a total of roughly 107,000.  The secretary of state’s office will now go through the process of validating the signatures.

The measure will go to the November ballot if fewer than roughly 13,000 signatures are rejected.