The Missouri House voted Monday evening in Jefferson City to give initial approval to legislation that would allow people suffering from terminal illnesses and debilitating medical conditions to use medical marijuana. 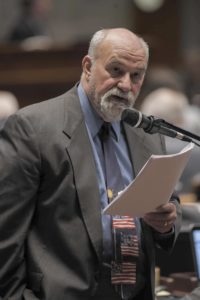 “My bill has to do with people that are terminal, and so I’m trying to provide some comfort to the folks who are in the last stages of life,” Neely says.

Supporters of the Neely bill say medical marijuana saves lives and is less addictive than opioids.

Opponents say marijuana is still illegal under federal law. The Missouri Association of Prosecuting Attorneys testified against the bill in committee earlier this year.

Under Neely’s bill, the Missouri Department of Health and Senior Services would be authorized to issue medical cannabis registration cards to residents 18 and older who can provide a signed statement from a doctor that they meet the bill’s criteria.

“The idea behind that (his legislation) is a result of my observation as a person who has worked in health care for several decades, and it just seems like this is the right thing to do,” says Neely.

Under the bill, terminal illness is defined as a disease that “without life-saving procedures will result in death in the near future or a state of permanent unconsciousness from which recovery is unlikely.”

The House, after a lengthy debate on Monday evening, also approved an amendment from State Rep. Shamed Dogan, R-Ballwin, adding epilepsy, multiple sclerosis, glaucoma, Crohn’s disease and other diseases to the bill.

State Rep. Travis Fitzwater, R-Holts Summit, tells the House he has two family members who suffer from MS, his mother and his sister.

Curtman, who served in the Marine infantry for four years, tells colleagues a Missouri Marine he knew suffered and was ordered by the VA to take numerous pills, which Curtman says didn’t help him.

“So, this Marine found some cannabis that he was able to use for medical purposes, but since it was illegal his neighbor called the police, ratted him out. The police came, arrested him,” Curtman says.

Curtman’s voice cracked on the floor, as he told the House the Marine ended up committing suicide.

The bill was approved on a voice vote, and needs one more House vote before heading to the Missouri Senate.