The Missouri House Transportation Committee Chairman will be the next presiding commissioner in southwest Missouri’s Newton County. 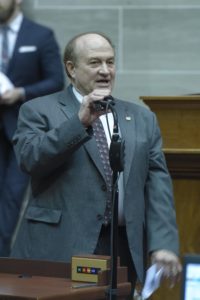 “We do have a lot of farms, a lot of county roads, we are bumping, we are a class two county, Newton County and getting close to that class one classification in Missouri,” Reiboldt says.

Newton County has about 58,000 residents.

Reiboldt is scheduled to become the next Newton County Presiding Commissioner in January.

He notes the county has Crowder College and a National Guard facility at the former Camp Crowder site.

Term limits prohibit Reiboldt from running again for the House. He’s in his eighth and final year in Jefferson City.

Reiboldt is most proud of his work on agricultural-related issues in the House. He served as the House Ag Policy Committee’s vice chairman for his first two years, then served as chairman for four years.

“And we saw some really good things come through the House and signed into law,” says Reiboldt. “My dairy bill, my farming rights statewide constitutional amendment. I’m very proud of that.”

He says the bill could save a minimum of about 60 lives annually in Missouri.

“Safety is a huge issue for our state. I want everybody that uses the roadways, all your families to get home safely. I want to keep the drunks and the texters off our roadways,” Reiboldt says.

Missouri’s transportation system task force has recommended a primary seat belt law, which would allow police officers to enforce the law as a stand-alone offense.

Reiboldt says 64 percent of Missourians killed on the road in 2017 were not wearing seat belts.

Click here to listen to the full interview between Missourinet’s Brian Hauswirth and State Rep. Bill Reiboldt, R-Neosho, which was recorded on April 5, 2018 at the Statehouse in Jefferson City: