(NASCAR)—Kyle Busch has become the second driver to win three races in a row as the NASCAR season reaches the one-fourth point, pulling away on the last restart to edge Chase Elliott by half a second at Richmond.

He and Kevin Harvick have accounted for wins in two-thirds of the races this year.

Busch moved to the point on lap 370 of the scheduled 400-lap race (it actually went 402 laps because of a late caution) after a pit stop under caution brought out by an incident involving Joplin’s Jamie McMurray and Ryan Newman. 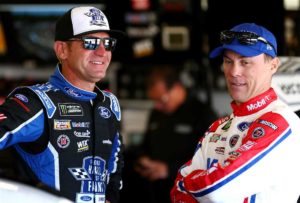 Clint Bowyer (right with Kevin Harvick) finished ninth and stands third in the overall point standings. McMurray recovered to finish nineteenth, still on the lead lap.  McMurray continues to struggle in the early going this year and is twenty-fourth in the standings, thirty-four points out of sixteenth position.  NASCAR’s playoffs begin after the twenty-sixth race and involve the top sixteen drivers.

NASCAR heads to the expected chaos of Talladega next weekend, the second restrictor-plate race of the season.  McMurray has won twice at the track and has posted a pair of runner-up finishes, including the Spring race last year.  Bowyer also has a pair of wins there and one runner-up finish.

(INDYCAR)—Rain so heavy it reduced visibility to zero or near-zero caused the suspension of the IndyCar race at the Barber Motorsports Park in Alabama after 23 laps.  The race will be restarted at 10:30 this morning, our time, and completed. 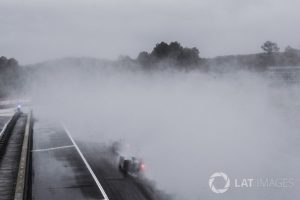 Defending series champion Josef Newgarden led all the laps.  IndyCar tried to restart the race but gave up for the day after running four laps under the yellow.

[FORMULA 1)—Formula 1’s next race is next weekend at Baku, Bahrain.