(NASCAR)—Kyle Busch bumped Kyle Larson out of the way to lead for the last six laps and finally ended a miserable weekend for racing at Bristol, Tennessee.

Rain delayed the start of the race yesterday and brought out the red flag twice, the final time to stop the race for the day.  A mixture of rain and sleet brought out the track drying equipment before the race could be resumed today and snowflakes fell on Busch in victory circle.

The win on the Bristol short track and last week’s win on the mile-and-a-half track at Texas has given Busch back-to-back victories for the fifth time in his career.  The win puts Busch sixteenth on the all-time Cup winners list, one win out of fifteenth.  Only Jimmie Johnson, with 83 victories, has more among active drivers. 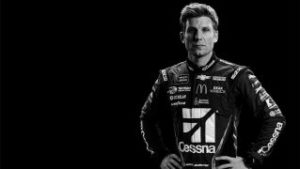 Clint Bowyer had a solid two-day run, finishing eighth, running all 500 laps.  Jamie McMurray (right), whose car was damaged early in the race, came home 19th, two laps down on the .533 mile oval.

The NASCAR show moves to the Richmond mile next Saturday night.

(ALSO NASCAR)—Before the race at Bristol, fans were polled about what music should be played when each driver was introduced.  The fans thought Metallica’s “One” was appropriate for McMurray, who carries that number one his car, and Hank Williams Junior’s “Country Boy can Survive” for Bowyer.