You are here: Home / Crime / Courts / Judge to rule Thursday in request for dismissal of Greitens’ criminal case

A St. Louis Circuit Court judge plans to rule Thursday about a request for dismissal in a felony invasion of privacy case against Governor Eric Greitens, R. The governor’s legal team accuses the prosecutor of misconduct by withholding a videotaped interview of the governor’s alleged victim. The tape reportedly surfaced an hour after a House committee released its report outlining accusations against the governor. 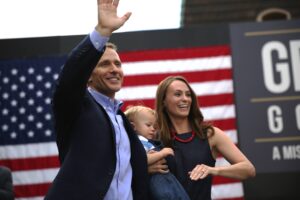 Initially, the tape was said to be unavailable because the machine malfunctioned. The Circuit Attorney’s Office says it turned over the videotaped deposition and an investigator’s notes once they learned the tape was viewable and the notes existed.

St. Louis Circuit Attorney Kim Gardner has issued a response to the defense’s argument. She says she took extra steps to verify investigator Tisaby’s testimony about the video interview that eventually surfaced and did so because of the “attacks on Mr. Tisaby’s credibility” raised by the defense.

“These attacks are unwarranted and appear to be an attempt to distract the Court’s and the public’s attention from the merits of this case,” says Gardner.

Greitens, who is scheduled to go on trial May 14, is also accused of transmitting a lewd photo of his former mistress. He has acknowledged having an affair with the woman in 2015 while preparing a run for governor. He denies any criminal wrongdoing.

To see Gardner’s response to the defense’s claim, click here.