You are here: Home / Crime / Courts / Greitens friend Scott Walker: “It’s difficult, if not impossible, for Greitens to continue to govern” 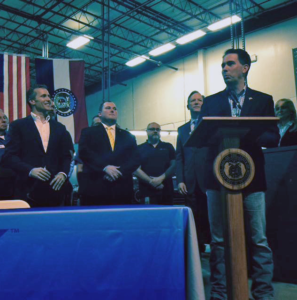 Wisconsin Governor Scott Walker suggests that it might be time for fellow Republican Governor Eric Greitens to call it quits. Walker, who campaigned for Greitens, calls the situation “horribly sad.”

“Looking at the what the legislature said there, if those reports are accurate and it seems like they keep reaffirming those, I don’t know how someone stays in that position. I mean, I just think for the citizens of that state, it’s difficult if not impossible to govern,” Walker says.

Greitens is under investigation for allegedly using sexual coercion, violence, and blackmail on his ex-mistress in 2015 while preparing a run for governor. He has admitted to having the affair but has denied any criminal offenses.